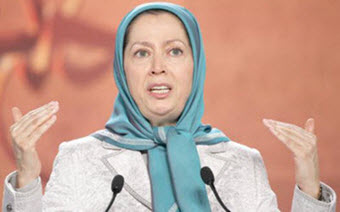 London, 18 Apr – In an interview with pan-Arab daily newspaper Asharq Al-Awsat Maryam Rajavi, who heads the National Council of Resistance of Iran (NCRI), took aim at the Iranian government’s regional and domestic strategies of interference.

Rajavi told the paper on Sunday that the Iranian government was resting on three main pillars: nuclear capabilities, absolute oppression inside Iran and exporting terrorism and extremism outside.

Rajavi stated that the fate of the Iranian government’s regional ally, Syria, was inherently linked to the future of Iran. The Iranian government has sent 60,000 soldiers from the Islamic Revolutionary Guards Corps (IRGC) and related militias to fight in Syria, she said.

“If Assad falls out of authority in Damascus, then the Iranian regime will evidently follow and collapse in Tehran”, Rajavi said.

In addition to supporting Syria’s ruler Bashar Al-Assad, Iran is giving military aid to the Houthi rebels in Yemen as part of a proxy war with Saudi Arabia. Rajavi called for a decisive alliance in the region to combat the extremism and terrorism being exported by Iran, especially in states such as Bahrain which some members of the Iranian government and IRGC claim is a province of Iran.

Rajavi dismissed the hyperbole surrounding Iran’s nuclear deal with the major world powers saying it will only “temporarily” prevent the manufacture of weapons. Indeed the Iranian government has continued to test ballistic missiles, which attracted ire but not sanctions from the international community.

Read a shortened version of the interview here in English or here in Arabic.

How the Iran Lobby Attacks the MEK

A few weeks ago, we wrote a piece detailing...

Brown considers plan to give Iran limited supply of uranium

The Guardian: Gordon Brown is considering a Saudi plan...