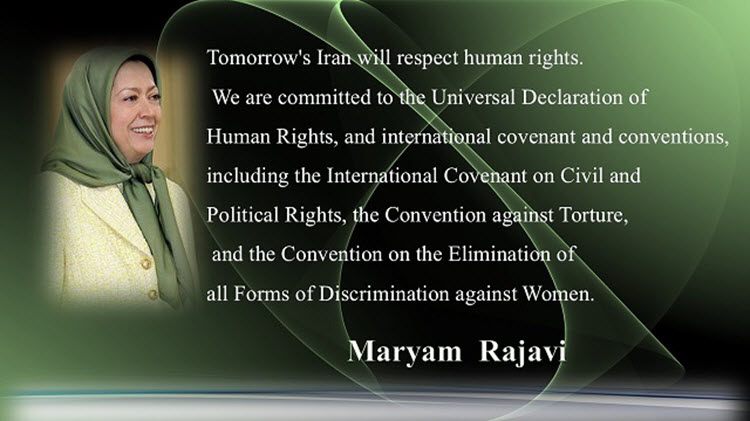 London, 7 Jul – It is now ten years since Maryam Rajavi, President-elect of the Iranian Resistance, presented the ten-point plan for a free Iran to the Council of Europe.

As leader of a coalition of some 500 Iranian opposition groups and figures, it has fallen to Maryam Rajavi to promulgate the plan, convincing disparate communities of interest that the only answer to fundamentalism is justice. The NCRI, a Parliament-in exile, has committed itself to hold free and fair elections for a Legislative and National Constituent Assembly “no more than six months after the ouster of the ruling theocracy.”

Maryam Rajavi declared to the European Council the following principles: universal suffrage; freedom of assembly and expression; the abolition of the death penalty; the separation of religion and state; non-discriminatory laws; the rule of law and due process (an end to Sharia law and compliance with international human rights law); the right to private property; equal opportunities in employment; and environmental protection.

Gender equality is point 5 of the plan, and commits a future Iran to give women freedom in marriage and clothing as well as in education and employment. It is worth noting that the fact that half of NCRI’s members are women is a tribute to Maryam Rajavi’s leadership in this respect. In other words, Maryam Rajavi has a demonstrable record in implementing principles.

As for the credo which will govern foreign policy, Maryam Rajavi declared that Iran would be non-nuclear, a country free of weapons of mass destruction. In addition, Maryam Rajavi committed the NCRI to respect for the UN Charter: “peaceful coexistence” would be the watchwords of a future Iranian foreign policy.

The principles Maryam Rajavi outlined ten years ago, and to which she has continually re-committed herself in the intervening period, are recognisable to any Western democrat as a bedrock on which to build a free country. As more and more decision-makers understand that a more imaginative response to fundamentalism is required, this ten-point plan is a trail of crumbs Mrs Rajavi has left for us to follow to a different world.

Daily Beast: As more devilish details of the U.S.-brokered nuclear...