Iran: World wide support for the successful relocation of MEK/PMOI 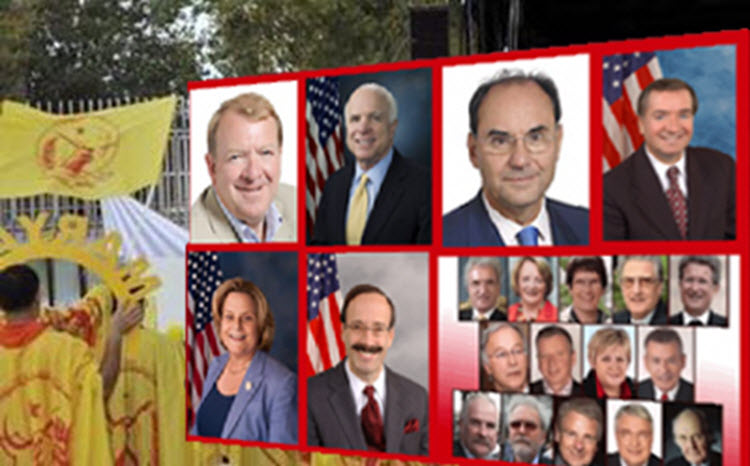 London, 19 Sep – Following the successful relocation of Iranian opposition group members from Camp Liberty in Iraq to safety in Albania, many high-ranking lawmakers, human rights advocates and dignitaries from around the world have offered their support.

The People’s Mojahedin Organization of Iran (PMOI or MEK) has suffered 14 years of violence from the Iranian Regime despite being designated as political refugees by the UN and awarded a protected status.

The unarmed group lost 141 members due to attacks and 1,000 more were injured. They also faced disruptions from the Regime of food, medicine, and fuel deliveries.

Here are some of the statements that were published on the website of the National Council of Resistance of Iran (NCRI).

We are glad the evacuation and resettlement of the residents of Camp Liberty from Iraq to Albania has been successfully concluded.  The safety and security of the residents has always been our primary concern, and they have now been effectively placed beyond the immediate reach of Iran and its terrorist proxies operating in Iraq. While the completion of this resettlement is good news, we know that attacks on Camp Liberty as well as Camp Ashraf cost far too many lives.

We also thank the Government of Albania for its generosity and compassion. They have opened the doors to the people of Camp Liberty and have allowed this process to move forward.

This is a welcome and long overdue development. I extend my deepest thanks to the Government of Albania for its hospitality and courage in its efforts to resolve this humanitarian crisis. Albania’s willingness to provide refuge to the residents of Camp Liberty is a true testament to the spirit and values of the Albanian people.

Given the history of the Iranian regime’s brutal crackdown on these residents and the subsequent violence directed against them during their stay in Iraq, I believe it is imperative that the residents continue to be recognized as people of concern and entitled to international protections underscored in the 1951 Geneva Convention. This is necessary to ensure that the residents will finally have the opportunity to enjoy their long-denied rights and privileges in a new and democratic environment.

Their departure concludes a significant American diplomatic initiative that has assured the safety of more than 3,000 MEK members whose lives have been under threat. And as everybody remembers, the camp they were in had on many occasions been shelled. There were people killed and injured.

Albania has a proud tradition of protecting vulnerable communities, as it did during the Kosovo conflict and in sheltering large numbers of Jews during World War II. I am very grateful that in this case too Albania was willing to play an important humanitarian role. I also want to thank the governments of Germany, Norway, Italy, the U.K., Finland, and other EU countries for helping to save the lives of the MEK. And this is a major humanitarian achievement, and I’m very proud that the United States was able to play a pivotal role in helping to get this job done.

Glad to hear the good news that all MEK residents from Camp Liberty have been transferred safely to out of Iraq and away from Iranian threats.

This summer marked the 28th anniversary of an extraordinary massacre of political prisoners in the Islamic Republic of Iran. In the span of a few months in 1988, upwards of 30,000 people were put to death as a result of minutes-long trials that were little more than loyalty tests for the regime. The vast majority of those victims were members and supporters of the People’s Mojahedin Organization of Iran (PMOI/MEK) and recently revealed information has helped to confirm that the massacre was primarily motivated by a longstanding desire to snuff out [the MEK].

The MEK is by all accounts a natural ally of those seeking civic freedom, human rights and democracy in Iran. The 10-point plan of Maryam Rajavi, the president of its political coalition, the National Council of Resistance of Iran, has been described as embodying the essential principles of any democratic nation in the modern world. It outlines a future for Iran that will be based on secularism, free and democratic elections, the active promotion of the rights of women, and avoidance of the current regime’s policies of aggressive intervention.

This evening the last group of Camp Liberty residents, members of the main Iranian opposition, People’s Mojahedin Organization of Iran (PMOI or MEK), left Iraq safely for Albania. However, the Iranian regime used every element to sabotage this operation.

This is a major defeat for the mullahs and the final failure of its repeated criminal attempts to massacre all the residents in Camp Liberty. It is also a historic victory for the Iranian resistance and the Iranian people and all supporters of democracy and freedom in Iran which was achieved only due to the steadfastness of Ashraf and Liberty residents, and the leadership of Maryam Rajavi, as well as the international campaigns by many parliamentarians, political dignitaries, lawyers and brave supporters all over of the world.

I was a member of the European Parliament from 1999 to 2014 and President of the Delegation for Relations with Iraq during my final 5-year mandate. I was able to learn at first-hand about the Iraqi government’s repeated attempts to annihilate the defenceless PMOI (MEK) refugees in Camp Ashraf and Camp Liberty, under the guidance of the Iranian regime.

Serial violations of the basic human rights of the civilian residents of Camp Liberty were ignored by the UN. Three massacres at Camp Ashraf, five missile attacks on Camp Liberty, two cases of abduction of defenceless residents, and the imposition of a fully-fledged eight-year siege, which left 177 residents dead, constituted parts of this vicious, although ultimately futile, plan.

As far as the mullahs are concerned they wanted to eliminate all of the people in Liberty or to make them give up and surrender. This did not happen due to the courage and resistance of PMOI (MEK) members who stood up against numerous conspiracies, as well as the inspiring leadership of Maryam Rajavi and the active backing of thousands of parliamentarians and Iranian communities all around the world.

Undoubtedly, today counts as a great and historic day for the democratic opposition and resistance of the Iranian people and all of us as supporters of this liberation movement.

During the last 13 years, the Iranian regime employed all possible destructive tactics against the PMOI (MEK) in Iraq. The regime provided extensive financial and military support for the terrorist groups in Iraq, resulting in 8 missile attacks against the innocent residents of Camps Ashraf and Liberty in Iraq.

Such assaults left 141 dead, hundreds wounded and 7 hostages, from whom, 6 are women and there is no trace of them. The regime’s intention was either to force the PMOI (MEK) members to surrender or the complete destruction of the PMOI (MEK) organisation. Despite the Iranian regime’s expansive and destructive efforts, thanks to their own heroic resistance in Camps Ashraf and Liberty, as well as their countless international campaigns the Iranian resistance was victorious.

What the Resistance has accomplished has been with the support of parliamentarians across the globe, but it has been without the support of national executives. This makes the successive blows it lands against the blood-drenched Ayatollahs, including the successful relocation of its members from Iraq to Albania, all the more noteworthy.

There is another government waiting in the wings, prepared to shape a future for Iran that is based on declared principles of secularism, democracy, and gender equality as it has been articulated by President of the National Council of Resistance of Iran, Maryam Rajavi.

Canadian Friends of a Democratic Iran

Canadian Friends of a Democratic Iran (CFDI) offers its congratulations to Maryam Rajavi and each resident of Ashraf (later Liberty) for the great success of the Iranian resistance in achieving the safe transfer of all Camp Liberty residents from Iraq to Albania, and shares the joy of the Iranian people and the resistance in thwarting the mullah regime’s plots against the lives of residents.