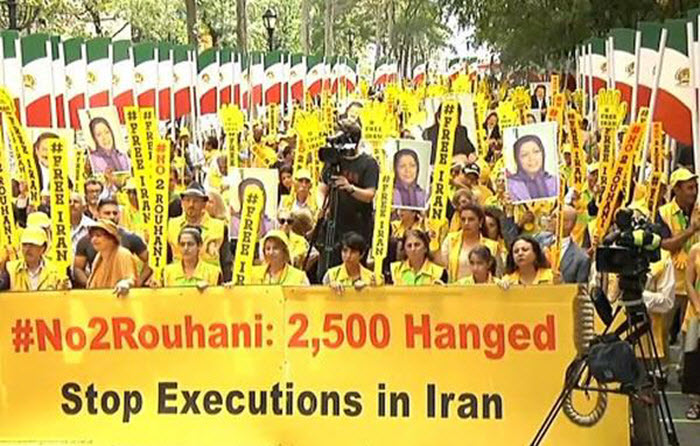 London, 21 Sep – The visit to the UN General Assembly (UNGA) by the Iranian President has attracted a large protest outside the UNGA in New York

They condemned the international community for their silence over the human rights atrocities committed by Iran and stated that relation with the despotic regime should be halted unless the human rights situation improves.

The protesters called on the UN Security Council to bring charges against the high-ranking Iranian Regime members- including Rouhani- for their roles in the 1988 massacre which killed 30,000 political prisoners in Iran.

Indeed, Iran’s Justice Minister, Mostafa Pourmohammadi, has expressed pride for his part in the massacre.

The protesters held a re-enactment of the Iranian Regime’s massacre and displayed pictures of those lost.

Rajavi said, “As long as the United States allows the leaders of a regime that Washington itself describes as the leading state sponsor of terrorism to set foot on American soil, and so long as the United Nations hosts them at the General Assembly instead of arranging for the ruling mullahs to face international tribunals for crimes against humanity, it means that they are standing against the Iranian people’s desire for freedom and democracy.”

Robertson, who compiled a report on the 1988 massacre, said: “By mid-August 1988 thousands of prisoners had been killed in this manner by the state, without trial, without appeal, and utterly without mercy. What happened in 1988 was a crime against humanity. Crimes against humanity are of a special hideousness. This dreadful act has never been punished, has never even been investigated… They cannot be forgotten and they cannot be forgiven. There is a duty on the world community represented by the United Nations to take action.”

Rajavi added: “There is no conceivable end in sight for the crises in the [middle east, without the removal of the Iranian Regime}. Appeasing this regime and standing on its side is a policy that has harmed the entire world.”