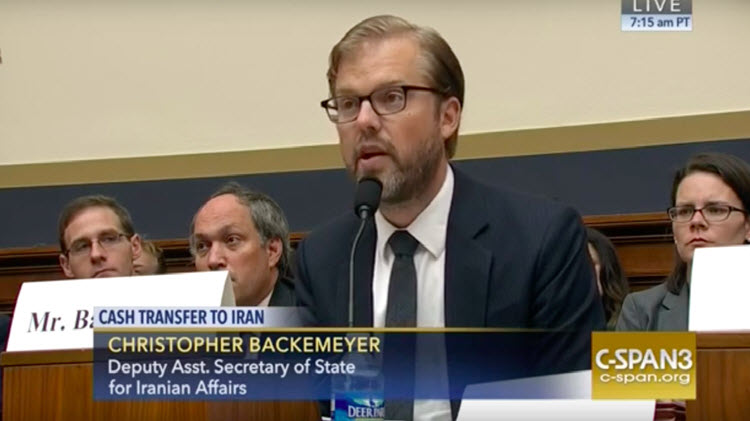 London, 19 Mar – A current senior official at the State Department, Chris Backemeyer, who serves as deputy assistant secretary for Iranian affairs under Secretary Rex Tillerson, was intimately involved in convincing public and private agencies of the Iran deal’s merits. Allegedly, he was a key component of the operation to sell the Iran nuclear deal to the American people.

As part of his duties under Obama, Backemeyer was the U.S. principal deputy coordinator for sanctions policy. He traveled throughout the country (and the world) working to convince multinational corporations to do business with the Iranian regime. He was also the lead sanctions negotiator in the P5+1 talks that resulted in the Iran deal.

Today, Backemeyer is the highest-ranking official at the State Department with intimate experience in Iran policy.

In an article by National security correspondent Jordan Schachtel, he writes that “Backemeyer reassured mega-companies such as Boeing that investing in Iran was a safe bet, while at the same time the Iranian regime was exporting its caliphatist ideology across the globe. Iran is the world’s foremost state-sponsor of international terrorism. The dictatorship in Tehran funds and aids several terrorist groups throughout the Middle East and the world at large.”

As part of the deal, Iran received an estimated $100-plus billion in assets for agreeing to stop its rapid nuclear development, a windfall for that country. But in fact, according to Schachtel, the deal gave Tehran an accelerated path to a nuclear weapon. Chris Backemeyer helped charter a deal that threw a lifeline to a regime with a flailing economy. Last year, it was revealed that the US paid a $1.7 billion ransom to Iran for the release of American hostages. In his testimony before Congress, Backemeyer claiming that the money would go to serve “the critical needs that Iran has had.” Instead, say Schachtel, “some of the cash was handed over to the Iranian Revolutionary Guards Corps, the group responsible for conducting Iran’s worldwide terrorist operations.”

The State Department official spoke at an annual confab last year, which was hosted by the National Iranian American Council (NIAC). This is a group that many Iranian dissidents consider to be a front group for Tehran, with deep ties to the regime.

Next head of top Iran assembly to be selected in early Sept.

UN action against Iran may be catastrophic for region