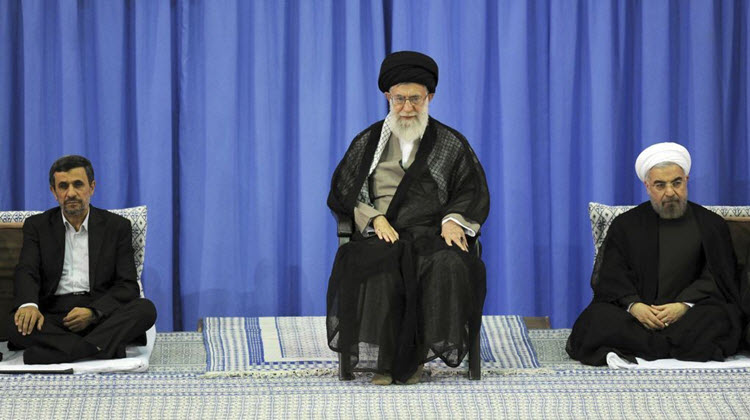 Ahmadinejad’s aide retaliated by describing Mohseni Ejei as a mentally ill person. As well, his former deputy in executive affairs, Hamid Baghaei, compared the judiciary’s spokesman to Heinrich Himmler, of the Third Reich. Baghei noted, “His motto was also ‘send the others to forced labor camps or sanatoriums’.” He said further, “It is true that the SS has been buried and Himmler is waiting to be severely punished for his actions in the world beyond ours, but, his thoughts and mottos are still alive and kicking among some people who follow his footsteps.”

Mohseni Ejei claimed that Ahmadinejad is suffering from mental disorder and it may be necessary to hand his lawsuit over to the legal examiner.

Ali Akbar Javanfekr, the former president’s top aide, fired back hours later on his Telegram Channel, “Is it not wise to directly hospitalize and refer to the medical examiner a 60+ year old person who dresses as a clergy, counts as an elder with white beard and occupies high state positions frivolously whistling in public and singling out himself as a clown?” This comment was in reference to a memory shared by Mohseni Ejei with his audience on Monday, December 11th, when he told Sharif University students, “During reformist presidency (Mohammad Khatami, 1997-2005), a group of students started whistling [to deride me] and I told them if it comes to whistling I outdo you all, since I am able to twitter without using my fingers.” Mohsaeni Ejeiand allegedly then began “warbling” for his audience.

Mohseni Ejei, in turn, stated, “The former president and his companions should firstly be examined by medical jurisprudence to decide whether they are mentally sound or not, since their behavior does not make sense.”

Ejei accused Ahmadinejad of mental illness while he was appointed as one of the members of influential Expediency Discernment Council (EDC) by by the Supreme Leader, Ali Khamenei.

The penal code in the Islamic Republic exempts mentally ill people from punishment for for a crime.

Recently, Tehran’s Friday Prayer leader called on the Iran’s authorities to avoid airing their dirty laundry in public. On December 22, ayatollah Mohammad Emami Kashani, known for his mild manner, cautioned, “The problems should not be publicly tabled. Some elders should be selected to weigh your words against the other’s side and address the problem.”

According to a former member of the Iranian Parliament, former President Mahmud Ahmadinejad was charged with financial violation worth around $3 billion.

It has also been announced by the Iranian Parliament’s Audit Court that Ahmadinejad, in the last 18 months of his presidency, spent 4.6 trillion Tomans or approximately $1.3 billion of Iran’s oil income illegally.

The former president was ordered to repay the money by the court, according to the parliament’s website. The ruling stated that during his tenure, Ahmadinejad spent oil revenues without proper transfer from the Oil Ministry to the treasury. The court found Ahmadinejad directly responsible, but issued no other measures against him.