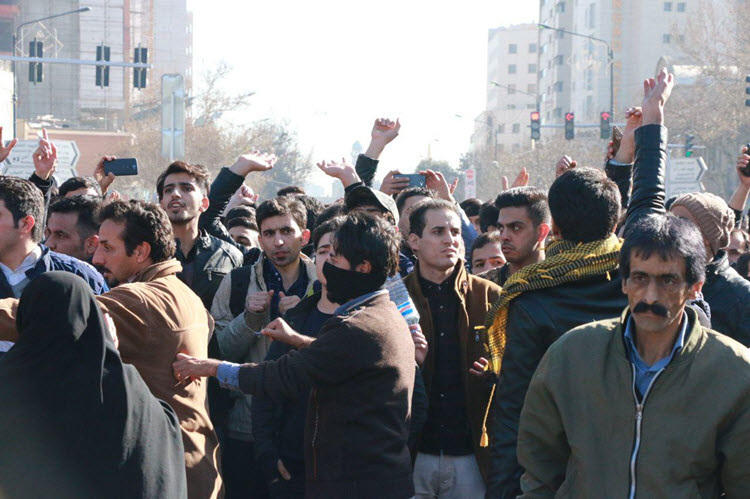 London, 28 Dec – Today, anti-government protests broke out across Iran, including in Mashhad, the second largest city, and one of the holiest places in Shia Islam. The protesters clashed with state security forces over the soaring cost of living.

In Mashhad, around 10.000 people joined together in major protests. People crowded the streets, and chanted “death to the dictator” in reference to President Hassan Rouhani.

Videos and images were posted online that seemed to show security forces firing tear gas into the crowd of protesters. Footage also displayed police using a water cannon against the demonstrators and hurling missiles towards them. Demonstrators had blood on their faces during the confrontation with police. Yet, Mashhad governor, Mohammad Rahim Norouzian, told media, “the demonstration was illegal but the police dealt with people with tolerance.” He alleged that a number of protesters were arrested for “trying to damage public property.”

Demonstrations also took place in Neyshabur, Shahroud, and Yazd. Pointing to the billions spent on the war to keep Assad in power, people chanted, “Leave Syria, think about us.”

Mr. Rouhani relied on the nuclear deal of 2015 to restore the economy after the lifting most international sanctions. However, those economic benefits have not been realized by ordinary Iranians. In fact, many Iranians believe their dire economic situation is due to corruption and mismanagement in government.

Unemployment in this past year was at 12.4 percent, up 1.4 percent from the previous year. Out of a total population of 80 million, some 3.2 million Iranians are jobless.

Iran’s Supreme Leader blamed US President Trump, saying, “Reagan was more powerful and smarter than Trump. He was a better actor in making threats.” He said further, “But Reagan is gone and, according to our beliefs, he now faces God’s retribution while Iran has made great advances in all areas since Reagan’s time.” Khamenei added, “This trend will continue under the current American president and any hopes on their part that the Islamic Republic would back off or weaken is futile.”

US President Trump refused to certify that Tehran is complying with its 2015 nuclear deal with world powers, and warned he might ultimately terminate the agreement.

As well, in a speech he detailed a more aggressive approach to Iran over its nuclear and ballistic missile programs and its support for militant groups in the Middle East.

In a lawsuit aimed at Iran, terror victims focus on ancient artifacts in a Chicago museum

New York Times: That a victim of a Palestinian...

A Tsunami of Malnutrition in Iran

The huge class gap in Iran is the result...