Iran Arrests Son of Cleric for Comparing Khamenei to the Pharaoh 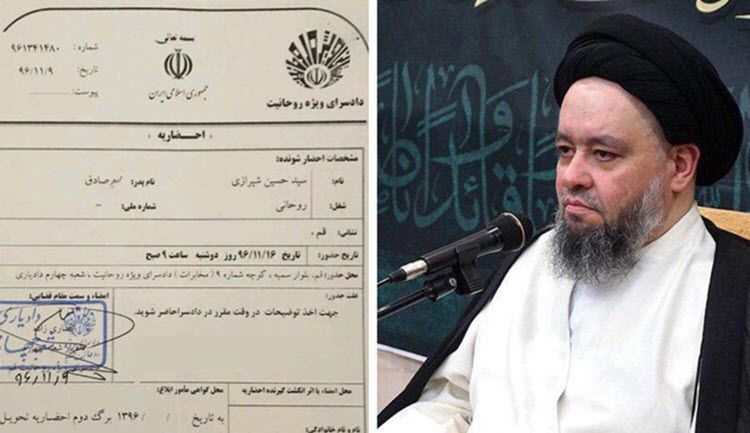 London, 07 Feb – Iran has arrested the son of a famous Shiite cleric in Qom for describing the Supreme Leader Ali Khamenei as “the pharaoh” during a lecture, according to Farsi-language news sites.

Hussein al-Shirazi, the son of Grand Ayatollah Sadiq al-Shirazi, was arrested on Monday morning for openly criticising the Iran’s practices and principle laws, according to the prosecutors of Qom’s clerics’ court on Shirazi’s arrest warrant, which was published by the microphone news site.

During the lecture, Shirazi compared the mullah’s rule to that of the ancient Egyptian Pharaoh, said that Iran was a tyrannical, religious dictatorship, and criticised Iran’s oppressive treatment of protesters, critics and dissidents.

A clip of this lecture was uploaded to YouTube a few weeks ago.

Sources close to the Shirazi family report that the intelligence services of the Iranian Revolutionary Guards Corps (IRGC) were responsible for Shirazi’s arrest as well as continued harassment of the Shirazi family for many years now.

The Shirazi family have long rejected the rule of the mullahs and Supreme Leader Khamenei and called for independence in politics. As such, they have a large following in Iran, Iraq, and other countries with a significant Shiite presence, but they are also routinely humiliated and intimidated by Iran.

Their clashes began when Mohammed Shirazi (Hussein’s Uncle) advocated for the Shura Council of Jurists to take control of Iran following former Supreme Leader Ruhollah Khomeini’s death. This would mean that the country would be ruled by a group of senior clerics, rather than one person. Shirazi also disagreed with Khamenei’s fatwa on the practice of slashing heads with swords during the ‘Ashura’ ceremony, which is performed by some.

Shirazi was silenced by the Regime for his insubordination, his influence was curtailed and he was put under house arrest until his death in 2001.

Although it is always good to see people turn away from the terrorist ideals of the mullahs, it is important to note that the Shirazi family offer their own extremist ideas and fuel sectarianism in the Middle East, and in terms of intellectual principles are not that different from the mullahs.

Iran is unable to take criticism, as evidenced by the ongoing protests in Iran. Why else would they throw 8,000 peaceful protesters in prison and threaten them with the death penalty? The Regime knows that its rule in untenable and fears that any criticism could be the thing to bring them down.

UK to protest after attacks on embassy party guests in Iran

The Guardian: The British embassy in Tehran is expected...