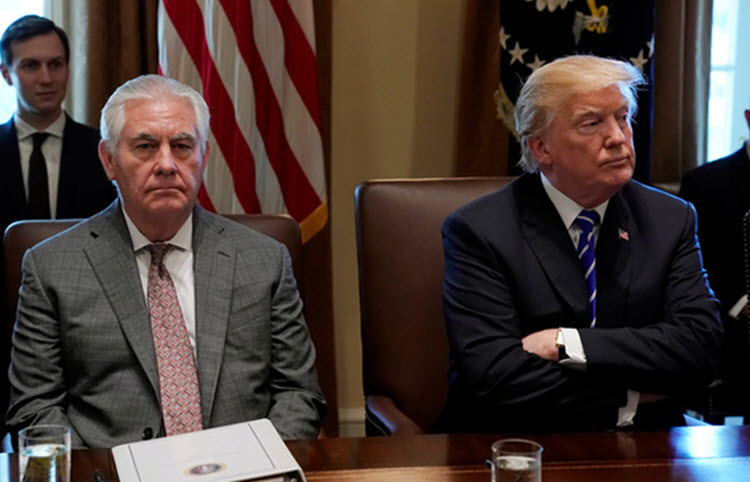 London, 15 Mar – US President Trump and his Secretary of State Rex Tillerson disagreed on many key issues, including the nuclear deal with Iran, North Korea, dealing with Russia, and, of course, Qatar. Tillerson also had disagreements Trump’s son-in-law and senior advisor Jared Kushner, the Homeland Security Advisor, and Trump’s ambassador to the UN. It’s not surprising that Trump has fired him, but that he waited so long to do so.

The State Department and its head play an important role; in that policies and positions adopted by the White House need its executive bodies take care of the details. Therefore, agreement with the president on the key issues is necessary. The State Department under Tillerson did not agree with the White House on several crucial matters, but most importantly on the Iran nuclear deal.

The previous Democratic administration made many decisions regarding Iran that still apply. Regarding the Iranian opposition and its protests against the regime, the State Department has refrained from supporting it until recently, when Trump declared his support for it.

CIA Director Mike Pompeo, Trump’s nominee to replace Tillerson, has extensive knowledge of dealing with such issues, from his experience as the leader of the world’s most prominent intelligence agency.

The Middle East’s key issues, which include confronting Iran’s expanding power, the Syrian crisis, the Yemeni war, and permanent issues like the conflict with Israel and terrorism all involve the US. Good relations with Washington are important, and cannot be streamlined by claiming that they are limited to trade deals and military contracts. The Middle East suffered when the Obama administration stopped selling weapons and ammunition during a serious war.

Regarding Qatar, one part of the disagreement with Tillerson — the Qatar crisis is a problem to Qatar but not to its neighbors, according to Abdulrahman Al-Rashed, veteran columnist and former general manager of Al Arabiya news channel, in his article for Arab News. He add, “It is not an issue like Yemen or Libya. It is one that may be resolved this year, or take several more years; i.e. there is no hurry to resolve it as long as it is merely a political issue with no bloodshed.” Further, Al-Rashed writes, “Doha must now realize that its friend Tillerson did not do it any good, but it did manage to hurt him.”

AP: A pro-reform Iranian website is reporting that acclaimed...