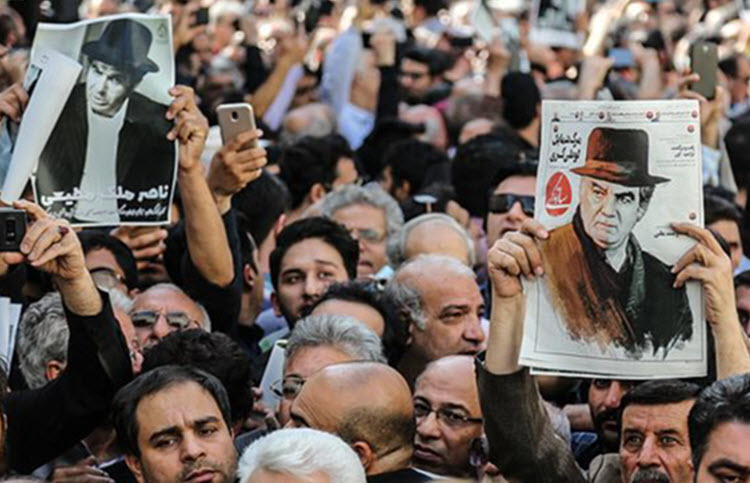 London, 28 May – In Tehran on May 27th, a large group of demonstrators remembered pre-revolution superstar Nasser Malek Motiee, who passed away on Friday evening of kidney failure at the age of 88.

Motiee was barred from appearing in movies or on television for some 40 years. Thousands of Iranians took to the streets on Sunday to pay homage to him. Young people who were born long after Malek Motiee vanished from their screens came out in large numbers to attend his funeral.

Those who took part were angry about Iran’s state TV’s behavior because two recent interviews with the superstar were not allowed to be aired. While Malek Motiee occasionally spoke to his fans on social media, these interviews would have been his chance to talk to his fans on national TV.

People chanted slogans in the street, condemning Iranian government for banning Motiee from performing. They used a catch-phrase from one of his most popular movies, “Qeisar! Help! They slaughter the people!”

The voice of one of Malek Motiee’s fellow actors, US based exiled actor Behrouz Vosouqi, was aired for the people attending the funeral ceremony, in an unprecedented move. Vosouqi told the mourners that Iranian government had banned artists like him and Malek Motiee from the screens for forty years.

Before the Islamic Revolution in Iran, Malek Motiee was an immensely popular star. He had appeared in more than 100 movies and television series. Following the 1979 revolution, he only appeared in two more movies, which were both were removed from the screen by hardliners.

Motiee was born in Tehran in 1930, and studied physical education at the Tehran Higher Education College. Prior to his acting career, he pursued an educator’s career as a sports teacher at several of Tehran’s schools. He once stated, “I entered cinema with empty hands and lack of knowledge and unsupported, but with love. People ignored our mistakes, and it would be a pity if we do not appreciate them.” He made his debut in 1949 with “Spring Variety”.

Iranian media were allowed to publish his pictures and pay homage to him on first pages for the first time in almost four decades. This led to a significant increase in their circulation.

Meanwhile, many actors and actresses criticized Iran’s state-run radio & TV for ignoring Malek Motiee and other pre-Islamic Revolution stars in its shows and newscasts.

In fact, speaking at a ceremony at Iranian filmmakers’ trade union, prominent actor Parviz Parastoee criticized Iran’s state-run TV for ignoring Malek Motiee for so many years, and for displaying pictures of him only after his death.

Fans of the late artist turned the demonstration into an anti-government protest. The government’s anti-Iranian and anti-art treatment of Naser Malek Motiei, who was isolated by the government due to his failure to accede their anti-popular policies, sparked chants of “Death to the dictator, Hail to Naser”, and “Our disgrace is our (state) radio and TV”.

The presence of security forces, supported by motorbike riding plainclothesmen, was documented on social media. They allegedly fired tear gas and fired guns into the air to disperse people chanting slogans against the Islamic Republic and its authorities. The people confronted the mercenaries and continued their ceremony while chanting, “Shameless, shameless”, and “State Security Force is our shame”.

In a cemetery exclusively allocated to Iranians who have been involved in music, arts and Cinema, Malek Motiee was laid to rest.