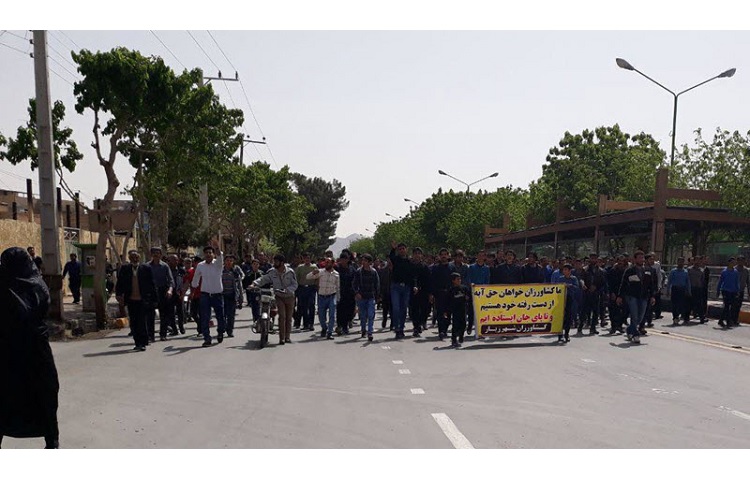 Iranian farmers in the Kharsagan district of Isfahan gathered on Saturday to protest a plan by officials and insiders to transfer water from the local Zayandeh Rud River to their steel mill and factory.

The protesters were able to get into the steel mill’s courtyard and storm the chief’s office, even though the Iranian officials dispatched anti-riot police units to quell the protests.

The next day, protesters gathered outside one of the IRGC-run water pumping stations that transferred Isfahan’s waters to Yazd province for use by government-affiliated companies.

Farmers in this area have a history of protesting for their rights because the system’s corrupt policies have reduced adequate access to irrigation water, which destroys plants and the farmers’ livelihood.

On several occasions over the past year, farmers have held mass protests to demand their right to water, but the Iranian authorities have always failed to address the demands of the people, even though they are clearly terrified by the power of the farmers, and the protests often lead to clashes with security forces.

In January, farmers from the areas surrounding the Zayandeh Rud River protested against the dictatorship. While, in November 2018, farmers of Gharneh, East Isfahan, held a protest outside the Yazd water pumping station to condemn the government’s mismanagement of water sources.

These protests are the last resort by the farmers, who merely want to reclaim their most basic rights and have no illusion that anyone, but the mullahs are to blame for the current situation. Therefore, their slogans, including “farmers will die but won’t give in to disgrace” and “death to the dictator”, target government officials and the clerical system in its entirety.

Farmers in Isfahan are relentlessly continuing their protests and demanding their rights.#Iranhttps://t.co/LHxE2M090p

On several occasions, farmers have attended Friday prayers only to turn their backs and chant, “Back to the enemy, facing the nation” when senior officials have started to give about the government’s opinions.

The farmers also coined the slogan, “the enemy is right here [the government] is lying that it’s the US” in their 2018 protests. This is in reference to the regime’s attempts to blame the country’s economic woes on foreign states when anyone can see that the Iranian economy has steadily depleted over the past 40 years with the mullahs in charge.

Ahmadinejad warns EU not to pursue sanctions on Iran