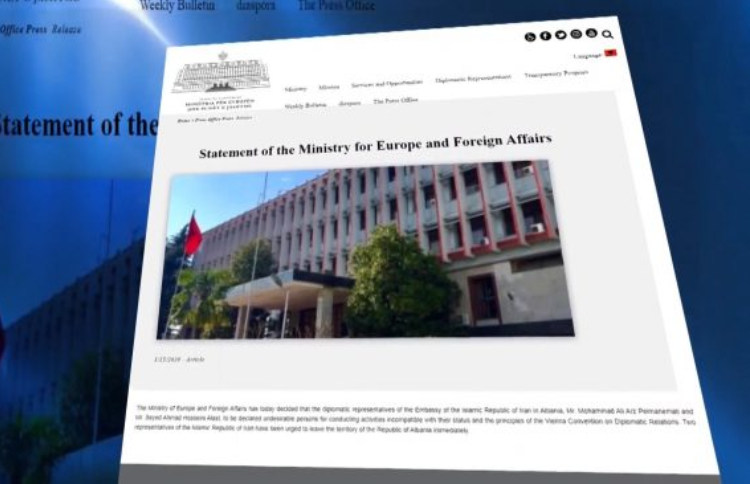 On Wednesday, January 15, Albania’s Ministry for Europe and Foreign Affairs announced authorities’ decision to expel two Iranian diplomats for activities “not in line with their status.”

Local media reported that the Albanian government has ordered two Iranian diplomats to leave the country within 72 hours, saying that they pose “a serious threat” to Albania.

Acting Minister for Europe and Foreign Affairs Mr. Gent Cakaj acknowledged that Mohammad Ali Arz Peimanemati and Seyed Ahmad Hosseini Alast have been required to leave the territory of the Republic of Albania immediately. He mentioned Peimanemati, third Secretary of the Iranian embassy in Tirana, and Hosseini Alast, Iran’s cultural attaché in Albania, had conducted activities that were non-compliant to their status and Vienna Convention on Diplomatic Relations.

“Ministry for Europe and Foreign Affairs has decided today that the diplomatic representatives of the Embassy of the Islamic Republic of Iran to Albania, Mr. Mohammad Ali Arz Peimanemati and Mr. Seyed Ahmad Hosseini Alast, to be declared undesirable persons, because of conducting of activity in discrepancy with their status and principles of the Vienna Convention on Diplomat Relations. Two representatives of the Islamic Republic of Iran have been requested the immediate leave from the territory of the Republic of Albania,” Announced Cakaj.

Local media also reported the two men were in direct contact with Qassem Soleimani, the commander of the Revolutionary Guards (IRGC)’s Quds Force, who was killed in a precision US airstrike near Baghdad International Airport on January 3.

Notably, since 2016, during a humanitarian mission, the Albanian government hosted about 3,000 members of the Iranian opposition Mojahedin-e-Khalq (MEK), which had moved there from Iraq. The MEK, which is also known as the People’s Mojahedin Organization (PMOI) inside Iran, previously declared that the Iranian government has executed more than 120,000 of the members and supporters of the organization. The Iranian government also has orchestrated hundreds of deadly attacks against the MEK/PMOI members and supporters across the globe.

In March 2018, Albanian authorities arrested and expelled two Iranian suspects who identified themselves as reporters. Later, it was revealed they were the IRGC-QF agents who were recruited to conduct a bomb attack against the PMOI/MEK’s celebration on the occasion of the Persian New Year, Nowruz.

In this context, the Albanian government discovered the role of the Iranian ambassador Qolam Hossein Mohammadinia and the first secretary of the Embassy Mostafa Rudaki in the foiled terror attack against the Iranian dissidents in this country. In December 2018, Albania finally expelled Iran’s alleged ambassador and diplomat for “damaging the country’s national security.”

It is worth reminding that on October 24, 2019, Albanian authorities revealed information about a Tehran-affiliated terrorist group that has been plotting against PMOI/MEK members. In March 2018, news broke that Albanian authorities had foiled a terrorist plot by the Iranian regime against MEK members in Tirana, who were gathering for the annual Nowruz celebrations. The Albanian Police Chief Fatmir Xhafaj announced that an Iranian regime’s Quds Force operative named “Peyman” organized and directed the attack from inside Iran.

After triggering the new wave of protests in Iran, the officials made their concerns publicly about the inspiring role of the MEK/PMOI as the strongest rival to the Islamic Republic regime.

On January 13, the Iranian government-linked newspaper Jomhuri Eslami published that subversive slogans are “fluttering in cyberspace” and that “some words and posts seem like they are coming from ‘Albania.’”

On January 8, Iran’s supreme leader Ali Khamenei unprecedentedly delivered public remarks and attacked Albania. He described this country as “a European country, a small country but very ‘treacherous’ and really ‘evil’ country in Europe” for hosting MEK/PMOI members since 2016.

Reuters: Activists should not try to change Islamic laws...