Maryam Rajavi: Unity against against terrorism and extremism under the name of Islam 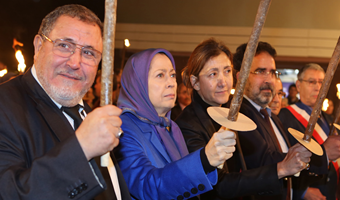 In a ceremony commemorating victims of terrorist attacks in Paris and in solidarity with the people of France held on Saturday, 21 November, the Iranian Resistance’s President-elect Maryam Rajavi reiterated:

The 13 November tragedy demonstrated that there are two opposing fronts; freedom-loving people and advocates of democracy and separation of religion and state, tolerant and democrat Muslims versus tyrants, savages, fanatics, ISIS, Bashar Assad and the Iranian regime.

Rajavi said: Muslims who believe in democracy are the most effective force which could fight and defeat the global danger of Islamic fundamentalism.

She called on all Muslims, particularly Muslims in France, to unite in a front against terrorism and extremism under the name of Islam.

In this solidarity event at the Iranian Resistance’s headquarters in Auvers-sur-Oise, Rajavi rejected the idea of cooperating with Assad to eliminate Daesh. She said: The very existence of Daesh from day one has depended on Bashar Assad and the Iranian regime. Two parties will be seriously hurt by Bashar Assad’s ouster, one is Daesh which would lose its breeding grounds. The other is the Iranian regime whose regional front would crumble and disintegrate.

Rajavi said: On the one hand, Daesh slaughters dozens of young people in the terrorist carnage in Paris, on the other, the Tehran regime rejoices this anti-human crime and threaten that if France does not accept continued rule of Bashar Assad, more attacks will be on the way.

She added: The massacre of defenseless people in Paris under the name of Islam is an attack on Islam and Muslims. Fundamentalism under the name of Islam — whether the Shiite variant (embodied in the velayat-e faqih dictatorship in Iran) or the Sunni variant as practiced by Daesh — is the enemy of humanity. Its heart beats in Tehran under the rule of religious fascism.

By Jubin Katiraie The Iranian government announced in recent...

Older son of bin Laden believed to be in Pakistan

New York Times: A son of Osama bin Laden who...