More Iranians Living in Poverty Due to Economic Crisis 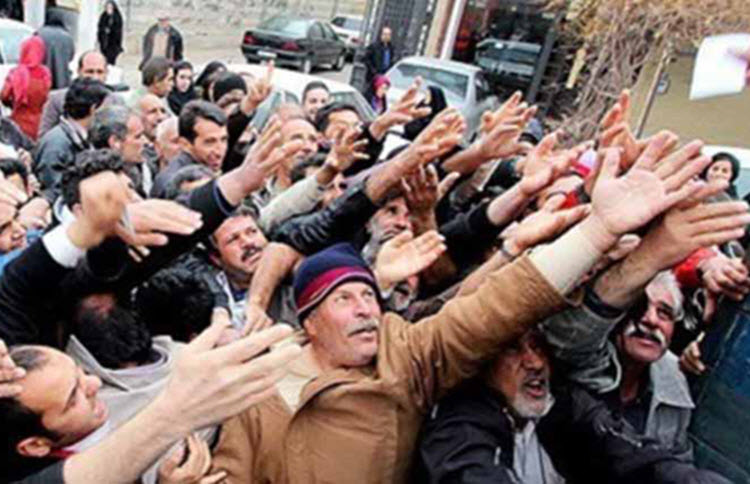 London, 13 Dec – More Iranians are living in poverty thanks to a spiralling economic situation and their monthly income not rising to meet inflation, according to the Iranian parliament’s research centre.

The poverty line for a family of four living in Tehran rose to a monthly income of 27 million rials in the second quarter of the Iranian year (June to September), according to the report released by the parliamentary researchers on Tuesday. This is a 22% rise compared with the same quarter in 2017.

Those earning below that amount, which equates to $650 per month based on the state’s artificial exchange rate of 42,000 rials to the dollar, are living in poverty.

The Iranian economy has fallen sharply over the course of the year with the rial depreciating in value against the dollar more markedly on the global exchange market. According to TheBonbast.com, the real exchange rate as of Wednesday was 105,500 rial to the dollar, which is five times what it was this time last year and two-and-a-half times the official exchange rate.

This makes it harder for low-income Iranians to buy necessities such as food and medicine that are often imported from abroad.

One of the main triggers for the weakening of the rial was the re-imposition of sanctions against Iran by the US, following Donald Trump’s decision to pull out of the 2015 nuclear agreement, when he noted that the deal did not do enough to prevent Iran from developing nuclear weapons. However, it is important to note that due to years of corruption and mismanagement, the Iranian economy was already shaky.

Iranian President Hassan Rouhani recently tried to put the blame for Iran’s economic crises entirely on US sanctions, but claimed that a growth in Iranian exports has achieved a “tangible peace in society”.

However, Foundation for Defense of Democracies analyst Behnam Ben Taleblu said that the problem lies with how Iran leaders are allocating their resources, noting Iranian involvement in the Syrian conflict, sponsorship of militias in Yemen, Iraq and Lebanon, and mass corruption among elites.

He said: “This includes massive tax exemptions for large parastatal institutions and having created off-the-books accounts that divert Iranian money away from the country and toward foreign wars.”

While Iranian professor Jamshid Assadi of France’s Burgundy Business School said that endemic corruption has driven businesses to compete with each other to bribe Iranian authorities in exchange for privileges. He said that only way eradicate Iran’s poverty is to consistently grow economic output.

However, that seems near impossible under the current ruling system.

Washington Post: A rebel attack on Hezbollah targets inside...