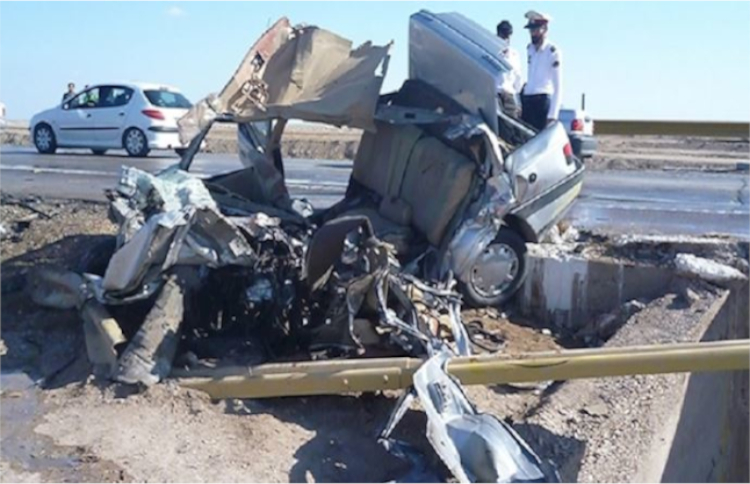 The official IRNA news agency reported on 23 May 2019: “The roads of Iran are smelling more and more of death year by year, according to statistics. The latest statistics show an increase of 6.7 percent of road accident-related deaths in 2018. If we consider the average number of people who lost their lives on the roads, with the averages of road accident injuries, it looks like that we’re faced with a total war or an earthquake in Iran. But in some cases, deaths on the roads are even more than unexpected events like earthquake, flood or war.”

The state-run Khabar Online website wrote that there is an “endless story of the marathon of roads accidents”.

“Nearly 227,000 people lost their lives very easily and without any sense in the past 10 years. Nearly four million people were injured. The casualties of car accidents in Iran are 8.5 times more than Germany, and have just a little better numbers than Sierra Leone. Here we are speaking about a disaster”, the report said on 6 August 2019.

Analysts say the government is trying to hide the main reason for such a high rate of deaths on Iran’s roads, and is speaking about human error as the main cause, but the truth says otherwise:

1.The lack of transport infrastructure and mostly narrow and non-standard urban and intercity roads
2.Corruption in the automotive industry and the low quality and unsafe nature of Iran’s domestically-produced cars, and outdated vehicles.

The truth is that the main cause is the corruption by the government which is choking the economy and the life of the people, analysts say. That’s is the reason why the “insurance institute” which is run by the government’s central insurance office said that out of 190 countries around the world, Iran ranks 189 in roads accidents and is just a little better than Sierra Leone.

Another fact is the corruption in the automotive industry. The situation is so serious that some state media organizations have called domestically-produced cars “killing Cars”, “iron ISIS”, and “wheeled coffins”.

The amount of corruption is so high that Bahram Parsaee, a parliament member from Shiraz, said on 5 April 2018:

“Predated and incapable car industry can be referred to as the Iron ISIS and the chariots of death, an industry whose figures don’t justify supporting it.”

“The people are condemned to use low-quality and unsafe cars, or if they want to use a foreign car, they must pay a fine for using the car. I’m sure it’s either a pseudo-mafia or a mafia”, he added.

The Fars News Agency, affiliated to the Revolutionary Guards, on 9 August wrote: “The average daily deaths in September in road accidents is even higher than the days of Nowruz. Sixty people are killed daily.”

The state-run news site Iran on 6 August wrote: “Forty-six people die every day in road accidents and every hour, two people die and six are injured”.

How to tackle Islamic extremism, the root of the Paris attacks.