Working in Iran’s Mines Comes at the Price of Death 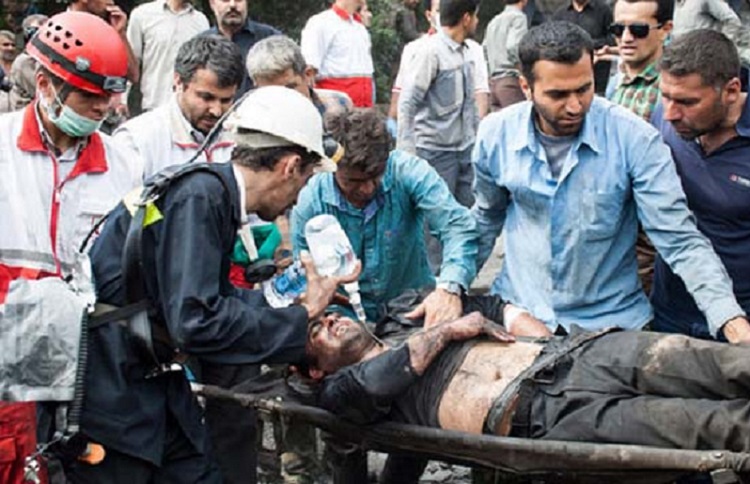 Working in Iran’s mines is a hard and onerous job. It is dangerous and harmful to the health of the miners. Most countries try to increase confidence through strict enforcement of safety standards, reducing the threats of such work as much as possible.

They also try to ensure the laborers are afforded proper insurance and good health care and mental security and reassurance.

But when it comes to Iran everything is different. The Iranian government not only does not try to provide better working conditions for the laborers, but it also answers their demands with forced expulsion and the cut off of their income. Worse still, it answers them with public lashes for protesting over their miserable conditions.

In the Saman Kavosh mine because of the collapsing of the tunnel two workers of the destruction section were stuck under the debris and died.

The Saman Khavosh is a small company and contractor which is operating under the umbrella of the Imidro company. The administration of the Imidro company is one of the elements of the government which is belonging to the Iranian President Hassan Rouhani’s faction who was in the former governor of the Boyer-Ahmad County.

However, Saeed Samadi, Secretary of the Coal Society of Iran, said that the culprit of this accident is not the Saman Khavosh, but the company Impasko. (Rouzegar Madan website, 17 October 2019)

Considering that the Impasko company belongs one hundred percent to the government, in all likelihood, the main culprit for this accident is the government itself.

This person also has confessed that there is much disarray in the Saman Khavosh mine so that a while ago a worker lost his leg. (Rouzegar Madan website, 17 October 2019)

By a strange confession, Davoud Sharaki who is the head of the Department of Industry, Mining and Trade in South Khorasan province said in an interview with the Young Journalists Club, affiliated to Iran’s Islamic Revolutionary Guard Corps (IRGC), and republished by the Rouzegar Madan website that despite these accidents, South Khorasan province has the lowest rate of accidents between all the mines in the country.

Asghar Masoudi, a member of the Iranian parliament, said: “The rules of the mine are not applying. The rights of the deprived miners are just dust and chagrin.” (State-run news agency ISNA, 14 October 2019)

Look at past casualty statistics

– Death of a 45-year-old mine worker, and injury of another worker in chromite mine collapse in Goji village, Zaveh city, Khorasan Razavi Province (state-run news agency ILNA, 12 October 2019)

– Death of an ore worker in the Sanddak village of Kouhsorkh district of Kashmar city (HRANA, 28 September 2019)

-Kerman’s “Water Nile” mine collapse; the death of one worker and injury to seven others (Tasnim, 16 September 2019)

-Mine explosion in Chamestan and death of two workers (Fars news agency, 8 September 2019)

– Death of a worker in the “Yellow check” mine in the village of Isaacvand Hersin (ILNA, 19 August 2019)

-Sarmak Malayer mine explosion; the death of two workers and injury of another worker (IRNA, 7 July 2019)

-Mine explosion in Suadkuh and death of two workers (Tasnim, 20 June 2019)

Damaghan’s Tazareh mine collapse; the death of two workers and injury of another worker (Tasnim, 13 June 2019)

– Raver Kerman province mine collapse with one dead and two injured (Tasnim, 31 March 2019)