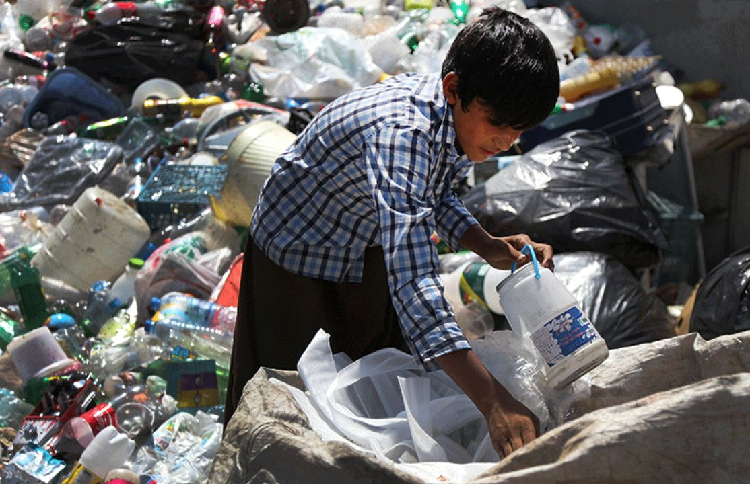 The situation of child laborers in Iran, especially those who search through garbage bins and landfill dumps, is too painful.

Government-linked media and experts describe this social phenomenon as modern slaveholding. “Garbage-collecting children are homeless kids who struggle to survive, as their futures go wasted in their search a piece of bread through garbage bins,” one such outlet wrote.

In the Iranian capital Tehran there are about 15,000 garbage-collectors who spend the majority of their hours in trash sites. Children constitute one-third of this number who range from ten to 15 years of age. Forty percent of these children are their families’ sole breadwinners.

In a program broadcasted by the state-run TV Channel Two on May 16, interviewees described these children as “grenades” that could explode at any moment. “Many of these children, those you see in the streets, are their families’ breadwinners. The fathers of these children, who are compelled to work, are disabled, crippled, or addicts and have left their homes in previous years. More than 80 to 90 percent of our child laborers could possibly be breadwinners. For instance, the brother of this child, who sits beside the heater, is ill. He needs to work to provide the costs of his brother’s medical treatment,” according to a program aired by Channel Two state-TV citing an expert in child labor.

“Overall, waste collection is a dangerous process. However, the lives of these children are the more miserable part. A large number of these children live in Tehran’s District 20, in the pits and garages of areas such as Ashrafabad, Ghaniabad, Mahmudabad, and Hakimiyeh in east Tehran,” wrote Iran daily on February 26.

Subsequently, this daily explained the livelihood conditions of these children. “They live in sheds and caravans around garages and ditches. The sanitary condition of these garages and ditches are very poor and extremely dirty. Many of these places do not have a toilet and you can rarely find a bathroom. There are no educational facilities and these kids just work.

“A civil organization had devoted a caravan as a school and a teacher voluntarily taught the children. These kids could be receiving education for two-three hours per day. Eventually, several months ago, [municipality agents] destroyed that ditch and these children lost the only opportunity for education. In general, most of these children are illiterate and have no school experience,” Iran added.

Furthermore, working girls are more vulnerable than boys and face more illnesses. These children regularly suffer from vitamin deficiency, iron deficiency, skin and ear infections, severe malnutrition, and diseases such as Hepatitis A and AIDS.

In Karaj, a large city located west of Tehran, a study of 60 landfills where these children work rendered catastrophic results. In this city, there are 12-14-year-old children who obtain their food through garbage. They live in sheds built with trashes. They are deprived of hygienic facilities and even a toilet or a bathroom. Reviews show that they have to evade diseases and insidious animals. Many work five to ten hours per day and several of them work even more hours to search the garbage to feed their families.

On the other hand, government-linked individuals have established a garbage mafia, furthering amplifying this social catastrophe. These people exploit unprotected children and pocket huge profits at the expense of the lives and health of these vulnerable children.

“A large percentage of the waste produced is controlled by the garbage mafia in the capital. The garbage mafia exploits women and children who have no caretakers and/or are abused, and who usually collect most of the garbage during the night hours. As a result, these mafias pocket large sums of money through the painful work of these children,” the ICANA news agency quoted Hossein Maghsoudi, MP from the city of Sabzevar in northeast Iran, saying on October 18, 2019.

Additionally, in addition to the garbage mafia, municipalities of major cities like Tehran obtain huge profits through exploiting these desperate children. “Annually, the huge profits of 4 trillion rials [over $23.5 million] in dry wasteland first in the pockets of contractors and then municipalities. This issue becomes further deteriorates when we know that each garbage-collector collects up to 150 kilograms of waste per day, but their share of this massive trade is only 18 percent and children benefit a mere six percent. Economic hardships and unbridled poverty have forced Iranian families and children to join this cycle,” the state-run Shargh daily wrote on June 11.

These children and their families are so impoverished that they must continue collecting garbage even amid the coronavirus crisis. After the COVID-19 disease emerged in Iran, the government initially prohibited garbage-collecting, and municipalities’ workers were collecting both of wet and dry waste. However, it did not take long before the huge profits of this trade caused officials to return to business as usual at the expense of the poor children.

According to officials, about 6 million daily and temporary workers are under the risk of losing their jobs. There is a likelihood that working families are forced to send their children to work due to economic and financial problems. Several children’s rights activists sounded alarms that many students may not come back to school and, after passing the quarantine period, they will join millions of dropout students who are in the labor market.

Meanwhile, a very small group of the population, mostly composed of officials and their relatives, enjoy luxury life and pay mind-blowing tuition fees to their children to educate in the best schools. Officials’ children, who are known as “Aghazadeh” among ordinary citizens, often continue their education at the best universities in the United States and European countries while the child laborers have to search through garbage bins to feed their families.

The existence of the child laborers, particularly garbage-collector kids, reveals a widening gap in Iranian society. This painful phenomenon is the direct outcome of the government’s corruption and mismanagement and these children and their parents are practically paying its cost.

Naturally, a dark fate is awaiting these hopeless children. Iranian authorities, in fact, lead a large number of citizens to illegal and illicit trade while they boast about countering underground activities such as drug transactions. In reality, as these defenseless kids lose their childhood, their future will not be too inspiring under the heels of the ayatollahs and the Revolutionary Guards (IRGC).