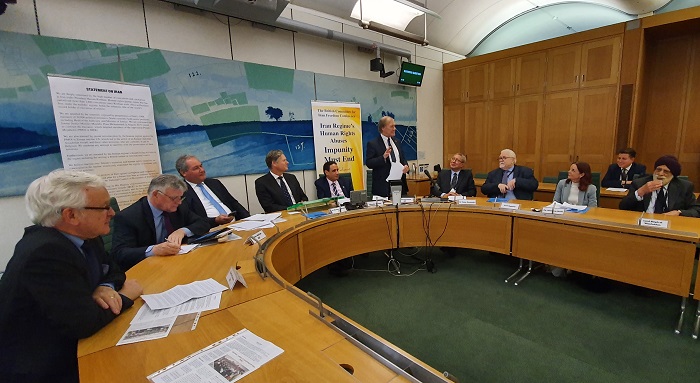 A delegation of the Iranian opposition coalition National Council of Resistance of Iran (NCRI) joined a UK Parliament cross-party panel of MPs and Peers for a conference on Iran in the House of Commons on Thursday, 17 October.

They discussed human rights violations and other concerns vis-à-vis Iran, including how Iranian officials operate with impunity despite their horrendous crimes, the Iranian government’s malign and destabilizing activities in the Middle East region and ongoing support for terrorism.

The regime steps up its aggressions against the governments in France, Britain and Germany seem to be paralyzed. It’s about time we abandoned the appeasement policy. We must proscribe the Revolutionary Guards (IRGC) and the Intelligence Ministry (MOIS) as terrorist entities.

Human rights violations [in Iran] are so well-documented that no one can deny them. We’re aware of these facts, but we must keep the pressure on our governments to take action on these actions on these crimes that take place on a daily basis.

Lord Tony Clark : (mullahs’ president) Rouhani tells the world he is a moderate. He is the same person who lied about the nuclear program and boasted about duping negotiators about nuclear proliferation. In 6 years of presidency, he has executed 3,800 people. #NoImpunity4Mullahs pic.twitter.com/SIYgK4WBnr

There is widespread support for the need to address the regime’s human rights abuses, regional aggression. There’s a strong consensus that the regime must be held to account.

The regime has turned the violation of international law into its own perverse statecraft. The regime comes to the international conference table, boasting that it controls four Arab capitals.

As long as we are here, showing that we care, there will be worry and concern among the mullahs in Tehran. The tensions are becoming stronger and stronger in Iran. There are young Iranians who have the courage and strength and determination to stand on the streets of their homeland and raise their voices. We want them to know that we are behind them, we support them and we will amplify their voices

The figures for this regime are just shocking. People do not understand just how bad the situation is in Iran. Looking at the fixtures and the way women and children are treated to prove why this regime must be challenged.

Iran exports its bloodthirsty beliefs to the world and the Middle East. There’s not a place in the Middle East that bloodshed is taking place and the mullahs are not involved. That is the legacy of the Iranian regime.

No government, no administration should be supporting the Iran of today. As long as they do not take action, then they are complicit with what is happening in Iran today. The people the regime has executed in public should be alive today.

There is cross-party support for your cause. The Iranian people have suffered greatly under this regime. We must do all we can. As David said, we want more action and fewer words.

We should be saying, let us get some action on what we want to see happen in Iran. I opposed the nuclear deal with Iran. We are giving the mullahs the opportunity to create nuclear weapons, and they will use such an opportunity to destabilize the world.