Egypt considering nuclear arms if Iran gets them 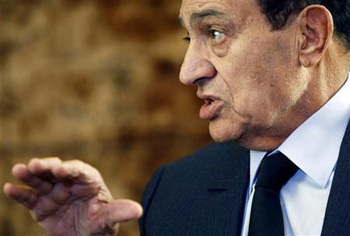 A cable from May 2008, one of hundreds of secret diplomatic documents released by the WikiLeaks website over the past week, described how President Hosni Mubarak told a U.S. Congressional delegation that everyone in the region was “terrified” of a nuclear Iran.

“Egypt might be forced to begin its own nuclear weapons program if Iran succeeds in those efforts,” the cable said in reporting about a meeting between Mubarak and the delegation on the sidelines of the World Economic Forum in the Red Sea resort of Sharm el-Sheikh.

Iran’s growing nuclear program, which it insists is only for peaceful energy production, has sent chills throughout the region and several Arab countries expressed their concern to the U.S. about it, included support for military strikes.

The head of Egypt’s intelligence service, Omar Suleiman, however, cautioned against military strikes against Iran in the same briefing, according to the cable. He said such an attack would not only leave Tehran’s nuclear capability intact but would unite its people against the U.S.

Instead he recommended pursuing sanctions.

In a meeting nearly a year later with the U.S. Chairman of the Joint Chiefs of Staff Admiral Michael Mullen, Suleiman does not shy away from describing Iran as a threat to the entire region.

He described Iran in an April 2009 cable as “very active” in Egypt, attempting to recruit Sinai Bedouins and smuggle arms and money into the Gaza Strip — measures he said Egypt was successfully combating.

The intelligence chief, who is Egypt’s chief interlocutor with the United States and neighboring Israel, added that he was conducting countermeasures of his own against Iranian influence, including recruiting agents in Iraq and Syria.

Egypt and Iran have had fraught relations since the 1979 Islamic Revolution and despite occasional tentative efforts at rapprochement, ties remain severed and the two regard each other as regional rivals.

A street in Tehran is also named after Khaled Islambouli, the assassin of former Egyptian President Anwar Sadat.

Suleiman offered the U.S. Egyptian assistance in taking on Iran around the region.

“If you want Egypt to cooperate with you on Iran, we will … it would take a big burden off our shoulders,” he said, according to the cable.

The Globe and Mail: Once Dr. Shahram Azam left...