The Guardian: Diplomats were struggling today to salvage international talks over Iran’s nuclear ambitions after the Iranian delegation signalled it would not negotiate over the most controversial part of its programme, uranium enrichment. 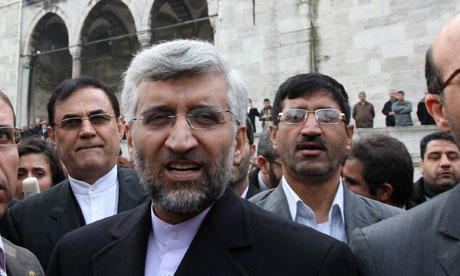 Diplomats were struggling today to salvage international talks over Iran’s nuclear ambitions after the Iranian delegation signalled it would not negotiate over the most controversial part of its programme, uranium enrichment.

Speaking to journalists outside a mosque in Istanbul, where the talks are taking place, an Iranian official said: “We appreciate the fact that our counterparts are not going to bring up the issue of enrichment.”

Western officials said the talks had to include Iran’s “obligations under UN security council resolutions” which demand suspension of enrichment. It is sensitive because the process can produce both fuel for power stations, Iran’s stated intention, and fissile material for nuclear warheads, the focus of western suspicions.

European diplomats said they were prepared to talk about restoring trust through confidence-building measures, such as a deal to exchange Iranian uranium for French-made fuel rods first proposed in 2009, but that it had to be in the context of Iranian willingness to compromise on its overall nuclear aspirations.

The talks came to a critical moment this evening as Lady Ashton, the European foreign policy chief, tried to persuade Iran’s principal nuclear negotiator, Saeed Jalili, to have a bilateral meeting with the head of the US delegation, William Burns, over the details of Iran’s nuclear programme.

Officials from six nations – the US, Britain, China, Russia, France and Germany – held a preliminary round of talks with Jalili in Geneva last month, which were inconclusive. Both sides delivered speeches on their positions but did not enter a dialogue.

“Any repetition of Geneva would be seen as a failure. There is no question,” said a European diplomat. “But in a way, there can’t be a repeat of Geneva, because there, there was a general amicable atmosphere through all the empty speeches. If the same happens in Istanbul, there would be a lot more frustration.”

In her Geneva meeting with Jalili, Ashton recalled that the two sides had agreed about the need to rebuild mutual trust and to return to Istanbul with practical ideas. Speaking on behalf of the six-nation group, she listed some of the ways Iran could restore the confidence of the international community, including allowing UN nuclear inspectors to visit the workshops were Iran makes centrifuges for enriching uranium and sites where uranium ore is mined and milled.

Jalili’s response was described by diplomats as “short and measured”, but it consisted largely of a critique of western policy. He said international sanctions had been counterproductive, and that the west had been wrong to refer Iran’s case to the UN security council. He told Ashton it would be “helpful” if the six-nation group could publicly defend Iran’s rights to a peaceful nuclear programme under international law.

An Iranian official attending the talks insisted, however, that they were going well. “Compared to the Geneva talks, the negotiations in Istanbul are being held in a more positive way,” Abolfazl Zohrevand told the Associated Press. “There are good signs that the two sides will make progress.”

He based his assessment on what he said was the readiness of the six nations to make concessions. “They didn’t get what they had hoped to get from pressure and sanctions,” Zohrevand said. “They are showing some flexibility. This is helping both sides to be optimistic.”

The language from Tehran as the diplomats met in Istanbul was combative.