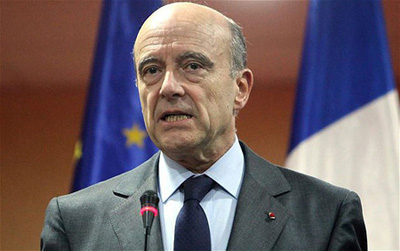 “Iran is pursuing the development of its nuclear arms, I have no doubt about it,” he told French television I-Tele. “The last report by the International Atomic Energy Agency is quite explicit on this point.”

“This is why France, without closing the path of negotiation and dialogue with Iran, wants stricter sanctions,” he added.

He said French President Nicolas Sarkozy has proposed a freezing of assets of Iran’s central bank and an embargo on exports of Iranian oil, a move also being considered by the European Union.

Tensions have risen in recent days after Iran — which insists its nuclear programme is purely for peaceful purposes — test-fired a series of missiles near the key Gulf oil supply route of the Strait of Hormuz.

Iran has no long-range missiles, a Russian defence official said Tuesday in Moscow’s first response to the series of missile tests conducted by Tehran.

“And it will not get such missiles any time soon,” he added.

Two of the missiles can fly a maximum 200 kilometres (120 miles), generally considered short-range weapons, although the Iranian media and a navy spokesman described one of them as “long-range”.

The other, a Nasr anti-ship missile, had a shorter range of 35 kilometres.

Russia has relatively close ties with Iran and built its first nuclear power station in the southern city of Bushehr. Moscow has also delivered the nuclear fuel for the reactor.

Moscow has echoed Western concerns about the nature of the Iranian nuclear programme but has stopped short of publicly accusing Tehran of seeking atomic weapons and always said that the standoff should be solved by diplomacy.