Gingrich: Shame on Europe for Doing Business With Iran 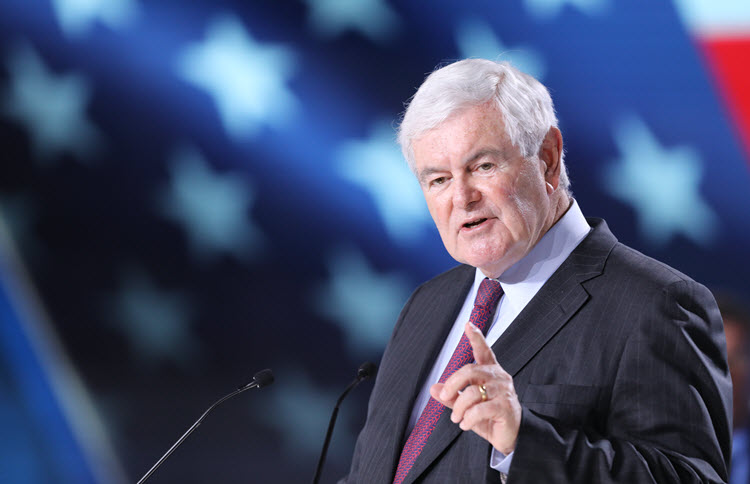 London, 6 July – Former Speaker of the US House of Representatives Newt Gingrich has demanded that European countries cut their shameful business ties with the Iranian mullahs and help the US to overthrow the Regime, during a speech at the Free Iran rally in Paris this weekend.

Donald Trump ended US business dealings with Iran back in May, when he pulled out of the fatally flawed 2015 nuclear deal and reimposed strict sanctions of the mullahs as part of an effort to bring political change to Iran.

Since then, he has warned China and India against continuing to buy Iranian oil lest they come under sanctions themselves.

The US President also issued a stark warning to China and India, saying they must stop buying oil from Iran or face sanctions themselves. But Gingrich warned that Europe could be next on the list, when addressing the rally, which was the target of a foiled terror attack by Regime agents.

He said: “We need to have a campaign to shame the European governments who are unwilling to support freedom and democracy. We need to make clear that whatever money they are making out of the dictatorship is a terrible price to pay for the people for their betraying in every single town in Iran. We need to insist that they join the sanctions once again. We need to encourage the American government to tighten the sanctions even further.”

The rally came at the same time that the anti-regime uprising in Iran was reaching a fever pitch. The protests last weekend, sparked by a failing economy and massive water shortages, ended with four more people shot dead by security forces and dozens more arrested.

Gingrich said: “The only way to safety in the region is to replace the dictatorship with democracy, and that has to be our goal… Our goal is very simple. It’s not to start negotiating. Our goal is to have a free democratic Iran that respects the rights of every individual.”

He then advised the gathering that freedom would come and that the Iran Resistance was on the right side of history.

National Council of Resistance of Iran president Maryam Rajavi paid tribute in her speech to the protesters and urged them to continue fighting for freedom, which is within reach.

She said: “The uprisings over the last six months have shown the wheels of change have begun turning in Iran. Nothing can now stop the determined people of Iran from obtaining freedom. The page has turned. There is no going back. The Iranian people are determined to overthrow this regime. The regime is extremely vulnerable. Regime change in Iran is within reach like never before. A bright future without executions, torture and suppression is coming.”

US has ‘dragged the world in mud’ says Ahmadinejad

UPI: The U.S. federal government is "comfortable" with the...