Iran sanctions: Where we go from here

Wall Street Journal: A coordinated strategy by the U.S. and the European Union will determine success or failure.

A coordinated strategy by the U.S. and the European Union will determine success or failure. 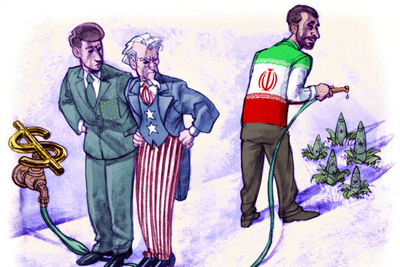 The overwhelming international support for the new U.N. Security Council sanctions against Iran represents one of the most tangible successes of the Obama administration’s foreign policy. While not mandatory, these new sanctions call upon states to prevent any financial service—including insurance and reinsurance, freezing any assets, and prohibiting new banking relationships—that contributes to Iran’s nuclear proliferation program.

The question now is whether the European Union and the United States can use the legal umbrella of U.N. sanctions to create a coordinated sanctions strategy to put the squeeze on Iran.

Following the U.N. vote on June 9, the Obama administration broadened its sanctions regime to target a state-owned bank and a score of state-owned petroleum, petrochemical and insurance companies. And yesterday, the president signed into law new congressional sanctions banning international firms that aid Iranian banks sanctioned by the U.N. from conducting business in this country.

Now the key test moves to the EU. It must put aside its traditional commercial relations with Iran and take firm action to prevent Tehran from going nuclear.

The goal of sanctions against Iran is to make the cost of continuing its nuclear program higher than the benefits. Shutting down the financial sources the regime uses to support its nuclear program is the most effective way to change its behavior. Iran is not North Korea: It is a significant economy that depends heavily on funding from its energy sector to sustain its nuclear program.

Iran skillfully exploits the differences in various countries’ sanctions regimes to finance its nuclear activities. Thus it is crucial that the EU and U.S. harmonize the disparities between their sanctions regimes, and then push their allies to adopt the same policies.

As a first step, the EU should place all Iranian state-owned banks on its sanctions list. Past U.N. resolutions only sanctioned one Iranian state-owned bank, Bank Sepah in 2007, for its role financing Iran’s nuclear program. The new U.N. sanctions add only one subsidiary of another Iranian bank. The U.S. has gone further, adding all other major state-owned banks—a total of 16—including Bank Mellat, Future Bank, the Export Development Bank and Bank Saderat. Since the U.N. vote, the U.S. also added Post Bank, barring it from the U.S. dollar market.

The EU is an entirely different story. In 2008 it barred any European companies from doing any business with Bank Melli, but took no similar action on any other Iranian bank. But the U.N. never explicitly designated Bank Melli at all, only calling for “vigilance” on financial ties to the bank. This lack of transatlantic symmetry is unacceptable, and only rewards Tehran.

The EU should sanction all Iranian state-owned banks and their subsidiaries, preventing any transactions with them in the eurozone market. All are involved in supporting illicit trade in arms, and all finance front companies for the nuclear weapons program. To leave any off the sanctions list only invites Iran to shift transactions to those not on the list. All pollute the integrity of the global financial system.

Second, the EU should make its sanctions systemic. America’s sanctions regime covers all transactions by Iranian state-owned banks—not only those directly related to nuclear activities. The U.S. bars dollar-transactions involving Iran if they are cleared through the United States. Right now, the EU has no similar policy. It should.

The EU should prohibit any euro-denominated transactions involving Iran from being cleared through the European banks. Once the U.S. ban was put into place, Iranian banks and front companies changed many of their nuclear-related transactions from dollars to euros. Thus, only by this prohibition can the EU protect its own banks from unknowingly participating in nuclear proliferation financing.

Third, the EU and U.S. should agree to ban all insurance companies under their jurisdiction from providing insurance or re-insurance to any ships carrying refined petroleum to Iran, which imports 40% of its needs, and prohibit any new investment in Iran’s oil and gas industry.

As a fourth step, the EU should work together with the U.S. in multilateral forums outside of the U.N. to broaden the number of countries undertaking serious financial sanctions. With EU-U.S. cooperation, Japan will be more likely to take the same type of action for yen-denominated transactions. If it did, Iran would be deprived of financing its nuclear activities in any of the three major international currencies. The EU and U.S. should jointly work through the 34-nation Financial Action Task Force, which has already played an effective role in limiting money laundering, to enhance its work on Iranian nuclear financing.

Lastly, it’s time to shine a harsh light on the Central Bank of Iran. The new U.N. resolution stresses the need for nations to exercise “vigilance” over the activities of the bank, but the EU and U.S. should go further.

Except in times of war, central banks have been sacrosanct because of the potential disruption to the global financial system. But Iran’s central bank has forfeited its special status. It functions like no other central bank. It is not only Iran’s monetary arm, but it conceals financial transfers, assists Iranian banks and companies in navigating around existing sanctions, and helps finance front companies to acquire nuclear technology and parts. The EU and U.S. should jointly warn the Central Bank that if it does not cease its illicit activities, it too could become a sanctions target. In the meantime, the new U.N. panel tasked with monitoring sanctions should be asked to report on the bank’s role in subverting past U.N. resolutions.

Whether or not sanctions are effective depends in large part on the EU’s will to take these steps. Harmonized transatlantic sanctions led by the U.S. and EU with the support of their allies offers the last, best chance of avoiding two unpalatable alternatives: Bombing Iran’s nuclear infrastructure, or conceding that Iran will become a nuclear weapons state.

Mr. Eizenstat was ambassador to the EU in the Clinton administration and played a major role fashioning international sanctions policy.

“Iranian society's sensitivity to the U.S. election could be...

BBC: European Union officials have called for an emergency...