Iranian dissidents and a U.S. dilemma

Reuters: Call it the coalition of the baffled — a diverse group of prominent public figures who challenge the U.S. government’s logic of keeping on its terrorist blacklist an Iranian exile organization that publicly renounced violence a decade ago and has fed details on Iran’s nuclear programme to American intelligence. 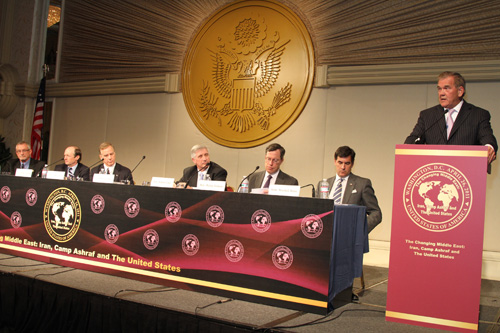 WASHINGTON, April 29 (Reuters) – Call it the coalition of the baffled — a diverse group of prominent public figures who challenge the U.S. government’s logic of keeping on its terrorist blacklist an Iranian exile organization that publicly renounced violence a decade ago and has fed details on Iran’s nuclear programme to American intelligence.

On the U.S. Department of State’s list of 47 foreign terrorist organizations, the Mujahedin-e-Khalq is the only group that has been taken off similar lists by the European Union and Britain, after court decisions that found no evidence of terrorist activity in recent years. In the U.S., a court last July ordered the State Department to review the designation. Nine months later, that review is still in progress and supporters of the MEK wonder why it is taking so long.

The organization has been on the list since 1997, placed there by the Clinton administration at a time it hoped to open a dialogue with Iran, whose leaders hate the MEK for having sided with Saddam Hussein in the Iraq-Iran war.

Calls to hasten the delisting process rose in volume after Iraqi troops raided the base of the MEK northeast of Baghdad, near the Iranian border, in an operation on April 8 that left at least 34 dead, according to the United Nations Human Rights chief, Navi Pillay. In Washington, the chairman of the Senate Foreign Relations Committee, John Kerry, called the raid a “massacre.” Video uploaded by the MEK showed gut-wrenchingly graphic images of dead and wounded, some after being run over by armoured personnel carriers.

The raid drew cheers from officials in Iran, where the group is also classified as terrorist, one of the few things on which Washington and Tehran agree. The word schizophrenia comes to mind here. Iran is one of four countries the U.S. has declared state sponsors of terrorism. The MEK’s stated aim is the peaceful ouster of the Iranian theocracy. Isn’t there something wrong with this picture?

In response to the April 8 violence, MEK supporters organized a seminar in Washington whose panelists highlighted the bipartisan nature of those critical of the terrorist label. It’s not often that you see the former chairman of the Democratic National Committe, Howard Dean, a liberals’ liberal, sitting next to Rudolf Giuliani, the arch-conservative former mayor of New York.

At a similar event in Paris on the same day, the podium was shared by Nobel peace prize winner Elie Wiesel, Gen. James Jones, U.S. President Barack Obama’s former national security adviser, former NATO commander Wesley Clark and MEK leader Maryam Rajavi. The theme at both events – take the MEK off the list and protect the around 3,400 Iranians in Iraq, who live in Ashraf, a small town surrounded by barriers and security fences.

To hear Dean tell it in Washington, the April 8 raid was evidence that the Iraqi government is becoming “a satellite government for Iran,” with the terrorist designation used to justify “mass murder.” Dean is not alone in ascribing this and a previous attack that killed 11 in Ashraf in July 2009 to the growing influence of Iran as the U.S. prepares to withdraw most of its troops from Iraq by the end of the year.

What then? You don’t have to be a pessimist to anticipate more raids, more bloodshed and a humanitarian crisis. Until the end of 2008, the U.S. was responsible for the security of Ashraf and its residents enjoyed the status of “protected persons” under the Geneva Convention. That changed when the U.S. transferred control of Ashraf to the Iraqi government which provided written assurances of humane treatment of its residents.

They don’t seem to be worth the paper they are written on. The Iraqi raid on April 8 came a day after U.S. Secretary of Defense Robert Gates was in Baghdad for talks with Prime Minister Nouri al-Maliki. One of the topics Gates raised — Iran’s influence in the region.

That Ashraf and the terrorist label for its inhabitants would put the United States in an awkward position after the transfer of responsibility was spelt out with remarkable clarity in February 2009 in a cable from the U.S. embassy in Baghdad. Marked secret and released through Wikileaks, the cable said harsh Iraqi action would place the U.S. in “a challenging dilemma.”

“We either protect members of a Foreign Terrorist Organization against actions of the ISF (Iraqi Security Forces) and risk violating the U.S.-Iraqi Security Agreement or we decline to protect the MEK in the face of a humanitarian crisis, thus leading to international condemnation of both the USG (U.S. government) and the GOI (government of Iraq).”

Which raises a question. How could the U.S. fail to protect unarmed Iranian dissidents opposed to a dictatorship but go to war to protect Libyans in a conflict between armed rebels and a dictatorship? Unlike the Libyan rebels, of whom little is known, the Iranians in Ashraf were all subject to background checks by the American military in the six years it was in control of the camp.

If there’s logic in protecting one but not the other, it’s not easy to see.

Bernd Debusmann is a Reuters columnist. The opinions expressed are his own.

AFP: The White House on Thursday again rejected the...