Is a gang of 22 destroying Iran’s currency?

Bloomberg: Life used to be so much simpler for an Iranian theocrat. Whenever trouble arose, you could blame it all on one villain: the “Great Satan” that is the U.S. Today, however, it appears that the devil has minions. Bloomberg 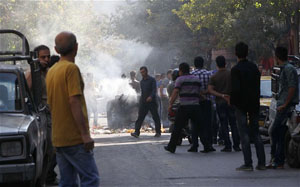 Life used to be so much simpler for an Iranian theocrat. Whenever trouble arose, you could blame it all on one villain: the “Great Satan” that is the U.S. Today, however, it appears that the devil has minions.

In describing the causes of the Iranian rial’s epic collapse in recent days, President Mahmoud Ahmadinejad blamed not only a “a hidden and heavy war on a global scale” being waged by “the enemy” — c’mon, you know who you are — but also 22 unnamed “ringleaders” whose identities, he told the nation in a televised statement yesterday, are known to security services.  Well, the government’s goons had best act quickly, because the president’s threat didn’t keep protesters from clashing again today with police outside Tehran’s main market or stanch the bleeding of the rial, which in street trading has lost 80 percent of its value against the dollar this year.

One suspects that average Iranians are pretty familiar with the main drivers of their economic troubles: comprehensive U.S.-led sanctions on Iran’s banking and energy sectors that have led to a 40 percent year-over-year drop in oil revenues in 2012, forced the government to discount petroleum prices to remaining buyers such as China, driven price inflation to nearly 25 percent and cost the government nearly half its foreign-currency reserves.

The public is also probably aware that the current crisis was set off by the government’s opening of a currency “exchange center” that was supposed to make it easier for traders to import basic goods by giving them a preferable exchange rate. Instead of calming the market,  the move led to panic, and Iranians rushed to convert their savings into dollars. Ahmadinejad has scoffed at this explanation: “Is this because of government policies? Never. . . . It’s due to psychological pressures. It’s a psychological battle . . . . The enemy is making pressure by playing with (exchange rate) numbers in the street.”

Critics of the U.S. approach will point out that neither Ahmadinejad nor Supreme Leader Ayatollah Ali Khamenei has backed down one inch on the country’s suspected nuclear weapons program. But sanctions are a long game, and will only succeed when the regime needs to make a choice between abandoning the atomic program and losing power. So the biggest news here might be the public statement by Parliament Speaker Ali Larijani that “80 percent” of the country’s economic problems are linked to government mismanagement.

Iranians are far more likely to believe that claim than the one about the nefarious Gang of 22.

NewsBlaze: Here is an interview with a former hostage...