Time to empower the Iranian Resistance

UPI: One of the major foreign policy tasks for Western leaders in the past 10 years has been the threat of Iran’s steady progress toward a possible nuclear weapon. The world’s powers’ approach to solving this problem has been focused on appeasing the theocratic rulers in order to change its rogue behavior.
By DAVID AMESS, UPI Outside View Commentator 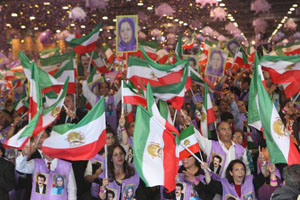 LONDON, Nov. 20 (UPI) — One of the major foreign policy tasks for Western leaders in the past 10 years has been the threat of Iran’s steady progress toward a possible nuclear weapon. The world’s powers’ approach to solving this problem has been focused on appeasing the theocratic rulers in order to change its rogue behavior.

Nevertheless, the only sober conclusion of a decade of appeasement and supposed constructive dialogue with the Iranian regime is that Iran is closer than ever to having a nuclear weapon.

The West has focused on the nuclear threat to the detriment of other serious threats posed by this rogue regime, like domestic repression, engagement in and support for terrorism and the expansion of its fundamentalist ideology.

Neglecting these threats has allowed the ruling theocracy in Iran to bully and threaten the world and the Iranian people.

From the onset the theocracy usurped power during Iran’s 1979 revolution. It has strengthened its grip by silencing critics and the voices for a popular rule in Iran through overt reckless repression. The domestic crackdown has targeted Iran’s main opposition, the People’s Mujahedin of Iran, which has a vast social network in Iran.

The PMOI is a member of the broader Iranian opposition coalition, the National Council of Resistance of Iran. This coalition has been committed to democratic change in Iran. The ruling theocracy has countered this threat by killing 120 000 supporters and members of the PMOI and NCRI during the last 30 years. Many of them were executed in prisons, murdered under torture and targeted by terrorist attacks abroad.

Despite this, the sham election of 2009 prompted large nationwide uprisings with chants of “death to dictator.” The Iranian regime admitted in the months after the uprisings that the PMOI supporters were the leading force behind this popular dissent.

Since then, the world has witnessed popular resistance overthrow dictatorial rulers in several countries in the Middle East and North Africa. The phenomenon was called the Arab Spring and experts, historians and politicians describe it as historical change for the region.

At the same time they warned that the religious fundamentalism poses an imminent threat to the efforts of these popular movements.

The heart of this religious fundamentalism sits in Tehran were the ruling theocracy, on the verge of acquiring nuclear weapon capability, act as a role model for like-minded groups in the Middle East. Its rulers have long used the resources and privileges of a rich Iranian nation to mobilize, fund and support fundamentalist groups as they target the West with terrorist attacks and expand their clout of influence in the region.

Today, the wind of change blowing in the region is challenging the Iranian regime’s closest ally in the region, Syria. In addition, the ruling theocracy is crumbling due to infighting between different factions of the government.

Meanwhile, the Iranian Resistance is gaining momentum with recent popular protests in Iran over harsher economic conditions with the Iranian currency in a free-fall, an inflation of 25 percent and a rapid fall in the living standards of people.

The ruling theocracy has therefore accelerated the number of executions inside Iran through new waves of mass hangings and has increased its supports for the Assad regime in Syria, a channel for terrorist groups like Hezbollah in Lebanon and Hamas in Gaza.

There is a home grown option for democratic change in Iran through the Iranian people and their legitimate resistance presented by the President-elect of the NCRI Maryam Rajavi.

In mid-2000, Rajavi also summarized the essence of the NCRI’s platform in her 10-point plan for the future of Iran. A plan that advocates a secular Iranian republic based on universal suffrage where the ballot box is the only criterion for legitimacy.

During the Arab Spring, the West sided with the people and supported opposition forces and the popular demands for change.

The West needs to adopt the same position toward Iran and change its current policy of appeasing the theocratic rulers in Iran, if the Western leaders want to avoid an Arab Winter in which the Iranian regime acquires nuclear weapons.

The Iranian Resistance movement gathered in Paris last weekend to forward their democratic option for Iran. Backed by a strong following of international lawmakers and thousands of Iranian supporters, the event is seen by many as a new beginning for the Iranian opposition movement.

The West has the answer, the only viable solution to neutralize the multiple Iranian threats is to recognize the NCRI as the legitimate representative of the Iranian people’s aspirations and offer political and diplomatic support to the Iranian Resistance in their efforts to bring about a democratic change in Iran through toppling the current religious dictatorship ruling the country.

As Maryam Rajavi stated in her remarks in Paris, “The trend of developments inside Iran, the advances of the Resistance and the international developments all indicate the time for the mullahs’ regime downfall has come.”

(David Amess, a Conservative Member of Parliament for the constituency of Southend West, is a leading member of the British Parliamentary Committee for Iran Freedom.

AP: Iran has extended $1 billion in credits for...