Protests Across Iran This Week 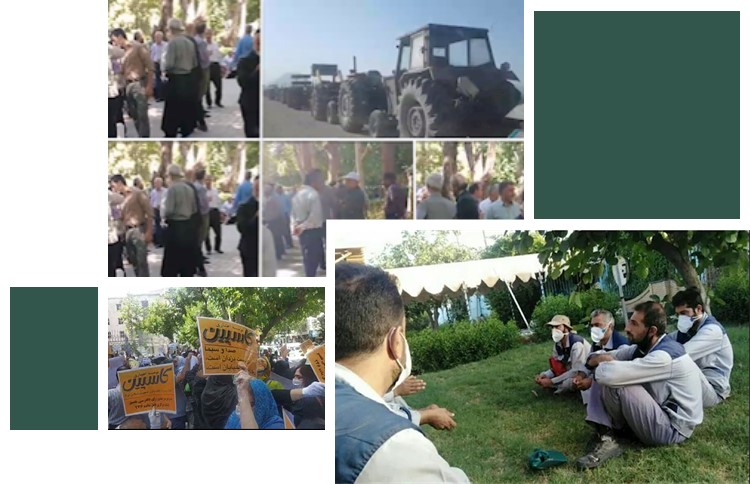 There are reports of various protests across Iran organized by workers from different industries, as well as cheated investors. The fact that these rallies are happening while the coronavirus pandemic is still sweeping Iran shows how serious the issues and the demands are.

Farmers in Isfahan held a rally outside the provincial governor’s office on Tuesday over the policy of rerouting river waters for the regime’s projects, which has deprived local farmers of adequate water for their crops and their animals. Farmers in Qahderijan, another city in Isfahan province, held a similar protest with the same demands, with videos showing that farmers turned up in their tractors.

On Monday, municipal workers in the Abadan refinery protested over having not received their wages and pensions for a long time. The workers said that their new contract provides more profit for the managers, with the supervising committee “literally resorting to threats” and expulsion of workers in order to illegally force them to sign the contract. The workers have now even been banned from entering the refinery.

That same day in Tehran, investors of regime-linked credit firms, including the Revolutionary Guards Corps’ (IRGC) Caspian Credit Firm, gathered outside the judiciary office that is supposed to investigate financial and banking crimes. They are demanding that their savings be returned. Other firms named there include Arman-e Vahdat, Alboraz Iranian, Alfaz Tuous, Thamen al-Hojaj, and Talaye Shadi. This rally was planned over a month ago.

On Saturday, nurses from private facilities in Tabriz rallied outside the governor’s office in East Azerbaijan Province to protests low wages and contracts that still list them as part-time, even amid the coronavirus pandemic.

One protesting nurse, who has four years of working experience, said:  “I am currently providing my service as an assistant nurse… Our wages are not based on Labor Law and we are receiving lower paychecks. In April we received a paycheck of 17 million rials per month (equal to around $100). Most of us have bachelor’s or master’s degrees and we are now working as staff members and assistants because there are no jobs anywhere.”

It’s worth noting here that the poverty line in Iran is four times the average monthly pay of these nurses.

She continued: “We have been wronged for too long. Those who have full-time and official contracts are receiving wages twice or three times our paychecks. We are working more than them but receiving one-third of their salaries.”

Reuters: The Iraqi government may extend a year-end deadline...