According to estimates by the Iranian regime’s main opposition group, the People’s Mojahedin Organization of Iran (PMOI/MEK), more than 550 people have been killed in the nationwide protests, 47 of whom were minors. The names of 492 of the victims have been published by the MEK.

In addition, more than 25,000 people have been arrested by the regime’s security forces. The ongoing protests have been taking place in more than 220 cities across the country since mid-September.

The trigger for the mass protests was the death of a young Iranian woman named Mahsa Amini. The 22-year-old died in Tehran in mid-September after being arrested by the so-called ‘morality police’ for allegedly wearing a headscarf improperly. Since her death, thousands of Iranians have been demonstrating against the government’s repressive course across the country for a Free Iran.

Despite the massive violence with which the regime’s security forces proceed, people are continuing to take to the streets. Even with threats of imprisonment or death, these brave citizens cannot, and will not, be moved or forced to back down.

The Javan newspaper, which is published by the Revolutionary Guards (IRGC), wrote on Thursday that the young demonstrators were going against the norms of the Islamic Republic. They wrote, “They are neither religious nor satisfied with their situation. They don’t believe in the past and that’s why they’re on the streets.”

The Revolutionary Guard commander Hossein Salami threatened revenge on “enemies who interfere,” he stated on Friday, “But we cannot say how and where we will take revenge.”

His remarks show the regime’s desperate situation, in which they do not know how to deal with the angry people, so instead, they decide to make foreign enemies responsible for the ongoing protests.

For the first time, figures have been published on how the leadership of the regime is assessing the wave of protests. While the regime never delivers accurate statistics, publishing figures about society’s situation reveals the regime’s critical situation and the expansion of the protests, as well as the people’s dissatisfaction.

55 percent of the population is said to be in support of the protests, and as many as 83 percent had sympathy for them in principle, without having taken part in them. 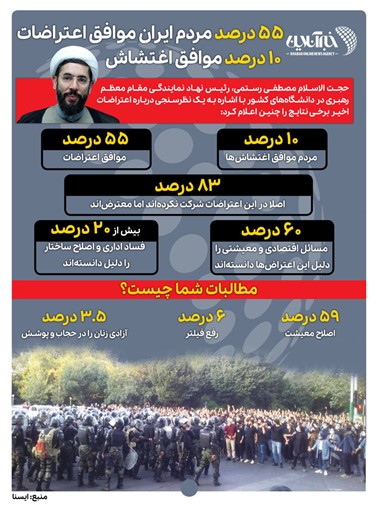 More importantly, 10 percent of people are supporting the riots, which the regime is referring to as ‘the people’s rebellion’. This shows that around 8 million people of Iran’s population are ready to sacrifice themselves for freedom. This is a huge number of people who are seeking fundamental changes, while according to scientific estimates only 3.5 percent is needed for the victory of a revolution.

According to media reports, Mostafa Rostami, the representative of the regime’s supreme leader Ali Khamenei at the country’s universities, gave these figures at a meeting with student associations at the university in the western Iranian city of Ilam.

The regime’s survey showed that 60 percent of Iranians who express sympathy say the poor economic living conditions are the main reason for the protests. More than 20 percent have identified administrative corruption and structural reform as the reason for these protests.

The 10 percent of rebellious people show that the country is on the path of a revolution, and their main demands are not simply administrative, structural, and economic reforms as the regime’s survey claims.

Rostami did not specify who conducted the survey. It is known that the regime’s intelligence service regularly conducts surveys without publishing the results. Rostami belongs to the inner circle of Ali Khamenei’s confidants.

For the first time, Khamenei did not describe the protests as ‘unrest’ but as a ‘hybrid war’ against Iran. Meanwhile, attacks on the regime’s clerics, its bases, repressive forces, and symbols are increasing. Alireza Arafi, head of the theological centers in the pilgrimage site of Qom, said many regime officials no longer dare to leave their homes.

They have shaved their beards and refrained from wearing their robes in public. Numerous recordings are circulating on the Internet of mullahs being harassed and insulted by the angry people who are fed up with these representatives of the regime.

Almost every night, rebellious youths are attacking the regime’s bases, torching and destroying its symbols. Their main target has become the supreme leader. Months before the current unrest, in previous protests, people addressed the regime’s president Ebrahim Raisi, but since the start of these protests, the main target of the people is Khamenei.

In a tweet, Rahmatollah Bigdelli, a regime cleric from the so-called ‘reformist’ party, reflected the people’s fury against the regime’s foundation while asking: 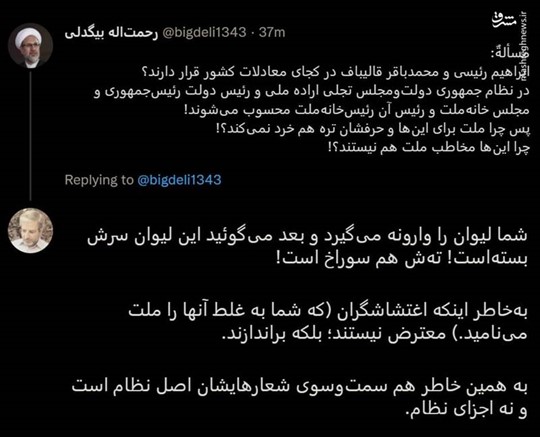 Some comments gave him the right response:

One user stated, “The problem of the nation with this system is bigger than the exclusion or criticism of these insignificant elements. The top of the pyramid is the cause of all the troubles of the nation and the country.”

Another person explained, “Because the rioters (which you wrongly call the nation) are not protesting, but demand overthrow. That is why their slogans are against the principle of the system and not the parts of the system.”

This simple conversion shows the “10 percent” which have rebelled against the regime to overthrow it, and this is the main difference from past protests.

Bloomberg: The U.S. is “not setting deadlines” for Iran...