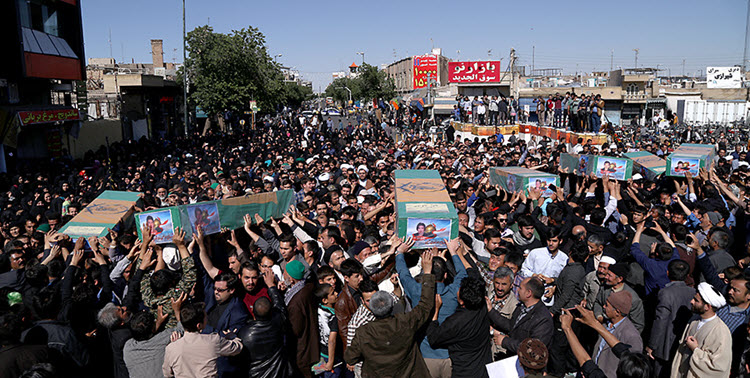 Tehran, 23 Apr – At least 11 persons who were members of either Iran’s Islamic Revolutionary Guards Corps (IRGC) or Iran’s regular army, killed in Syria in the recent days, have been buried in various Iranian cities.

The state run ISNA news agency reported on Wednesday that the public relations section of the IRGC in the central Iranian Qom Province had issued a statement announcing the burial of seven Afghan mercenaries who were killed in Syria. Their names were given as Habib Rezaie, Mehdi Hosseini, Abdolhakim Rasouli, Hossein Hosseini, Mohammadjavad Askari, Khodabakhsh Mohammadi, and Hassan Reza Rastegari. They were all members of the Fatemiyoun Division of the Quds Force, the foreign operations division of the IRGC.

The Fatemiyoun was formed three years ago, comprised entirely of Afghanis, for the express purpose of fighting in Syria in support of the country’s embattled leader Bashar al-Assad.

ISNA also reported that two other individuals, Javad Mohammadi and Morteza Hosseini had already been buried after having been killed in Syria. Mohammadi, 36, had been on his third deployment to Syria in defense of the Assad government.

The state-run Fars News Agency reported on Wednesday that Sadeq Shibak and Hossein Hemmati from the Special Airborne 65th Brigade, also known as Nohed or the green berets, had been killed in Syria.

Each of these reports helps to underscore that the number of Iranian casualties in Syria has markedly increased in the past month. During that same month, Iranian military officers have officially confirmed and announced the presence of additional Iranian forces in the Syrian conflict. Tehran defends these deployments mainly on the pretext of defending shrines that are sacred to Iran’s official Shiite religion.

In a statement on Tuesday, the National Council of Resistance of Iran (NCRI) said: “’Defending the sacred shrines’ is a pseudonym for the dispatch of large groups of Revolutionary Guards and paramilitary forces for the massacre of Syrian people in the past five years, as well as the expansion of the regime’s influence and power in Iraq. Aleppo, which the Iranian regime has [launched] an all-out campaign to occupy in recent days, or Iraq’s Diyala Province, where the regime and its mercenaries have staged atrocious ethnic cleansing, are both hundreds of kilometers away from Shiite religious centers”.

The NCRI said that according to reports obtained by the Iranian opposition from inside the country, right now there are over 60,000 Revolutionary Guards and foreign paramilitary mercenaries who are involved in the Syrian war. Following the repeated defeats of the IRGC and the death of many IRGC commanders in Syria, Iran’s Supreme Leader Ali Khamenei has dispatched the regular army to Syria as well, the group said. This is the first time since the 1988 ceasefire in the Iran-Iraq war that the Iranian regime’s army has entered into a foreign war that is over a thousand kilometers away from Iran’s borders, it added.

At UNGA, Trump Dashes Iran’s Hopes Regarding US Policy and Nuclear Deal