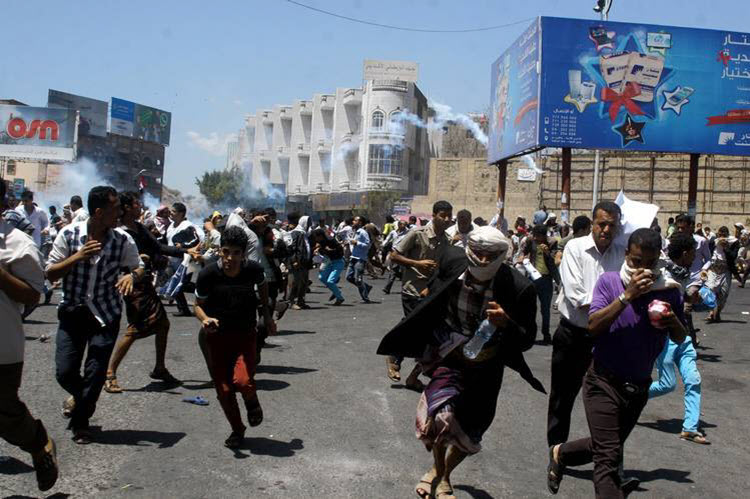 London, 18 Aug – A rights group said on Wednesday that the repeated and indiscriminate shelling of populated neighborhoods of Taiz, Yemen’s third largest city, was perpetrated by Houthi militia and forces loyal to deposed President Ali Abdullah Saleh, and were in violation of the laws of war.

During the artillery bombardment over a 10-day period in May, at least 30 civilians were killed, and more than 160 were injured, in the shelling by Houthi-Saleh forces. This attack on the populated areas of Taiz “has taken a terrible toll on civilians,” according to Sarah Leah Whitson, the rights group’s Middle East director, who demanded, “Their commanders should immediately halt these indiscriminate attacks.”

From an elevated area in Al-Hawban district Houthi-Saleh forces indiscriminately fired mortar bombs and artillery shells into populated areas in Taiz. Human Rights Watch said that this has gone on for the past two years.

Taiz has been controlled by the government-affiliated forces of internationally recognized President Abed Rabbo Mansour Hadi since March 2016. Local monitors report that there are numerous attacks by Houthi-Saleh forces in their city.

A leading Yemeni human rights organization, Mwatana, said Houthi-Saleh forces were responsible for most of the indiscriminate shelling incidents they documented in Taiz between April 2015 and March 2016.

A list of casualties from attacks over the three days in May when shelling in Taiz was particularly heavy, was prepared by Faris Al-Obidi, a local activist, after he spoke with witness and survivors and consulted the logs at Taiz’s three hospitals. He shared the list with Human Rights Watch. It had the names, ages, and dates of injuries for 54 civilians. Three children and two women were among the 14 dead.

Dr. Ahmad Al-Dumaini, technical director at the city’s main hospital, Al-Thawra, said the hospital received 58 wounded civilians between May 20 and 26. The casualties included 20 children, and three people who died before arrival, one of whom was a child. The majority of these injuries were from shelling, he said.

The laboratory chief at Al-Safwa Hospital, Dr. Walid Al-Watiri, said that over a 10-day period, Al-Safwa, Al-Thawra, and Al-Rawda hospitals received the bodies of 31 people, including six children, and another 167 wounded, including 60 children.

Human Rights Watch documented that witnesses to the six attacks in Taiz said that at the time of the attacks there were no government-aligned military forces in those areas.

Previously, Human Rights Watch documented Houthi-Saleh shelling in Taiz. Shelling killed at least 18 civilians and wounded 68 others over three days in June 2016. According to the UN, markets crowded with people shopping for Ramadan were targeted. Additionally, three Houthi-Saleh attacks on Taiz killed at least 14 civilians, including five women and five children in August 2015, activists in Taiz provided the rights group with a list in February 2017 that documented the dozens of attacks on Taiz since March 2015 resulting in numerous civilian casualties.