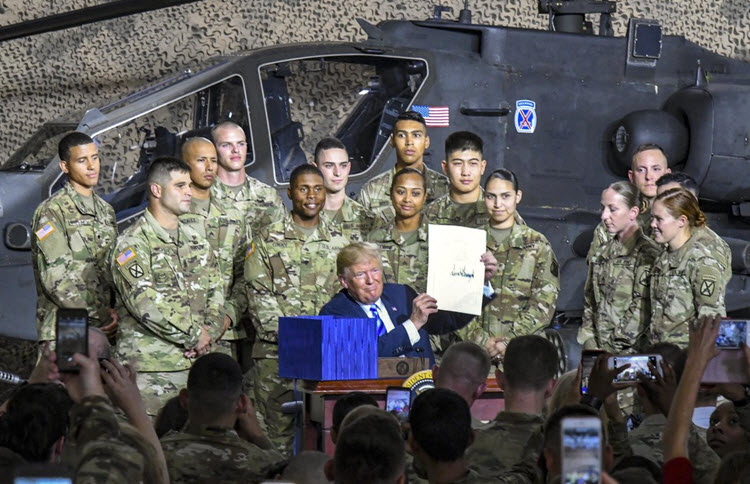 London, 16 August – US President Donald Trump signed The National Defense Authorization Act (NDAA) on Monday. This Act encourages the Defense Department and State Department to come up with a strategy to confront Iran in Syria, and prevents US support for Iraq in aiding Iran’s allies. It has an unprecedented focus on Iran as a threat to both the Middle East and US national security.

The Trump administration’s stated goal is the confrontation of Iran in the region, beginning with its exit from the Iran deal and reinstating sanctions. The NDAA goes further, proposing a strategy on how to best confront Iran’s activities in Iraq, Syria, Lebanon, Yemen and elsewhere.

Iran’s behavior in the region is a deep concern, and Iraq is, as well, because the US is helping to train and equip the Iraqi security forces, and assist them in fighting remnants of Islamic State. However, last May, US officials warned “Iranian support to certain Shia [Popular Mobilization Forces] militias posed the greatest threat to the safety of US personnel in Iraq.”

Secretary of State Mike Pompeo said in his speech announcing the US’s withdrawal from the Iran deal, “Shia militia groups and terrorists infiltrate and undermine the Iraqi security forces and jeopardize Iraq’s sovereignty.”

The NDAA mandates that the US be made aware of the Islamic Revolutionary Guard Corps (IRGC)’s involvement in the Iraqi security forces. That the IRGC may be receiving US equipment and training, was a worry for Congress. With this Act, no funds under under its $700 billion budget are to go to groups in Iraq affiliated with the IRGC.

Haider al-Abadi, the prime minister of Iraq, wavered on whether he would support US sanctions, but by highlighting Iran’s role in Iraq, Congress strengthens Pompeo’s ability to confront the Iraqi government. Washington doesn’t want to defeat ISIS in Iraq, only to have Iran take its place.

The bill also encourages the Secretary of Defense to detail arms transfers between Iran and Hezbollah in forthcoming reports, and requests information on Iran’s activities in Syria.

In July, Secretary of Defense James Mattis said, “You see how much Iranian presence and support has been committed to keeping [Syrian President Bashar] Assad in power.”

The Department of Defense’s August 6th Inspector General report noted, “Iran’s training and equipping of foreign fighters in Syria [as presenting] an ongoing threat to US-backed forces [in Syria].” The US has used “indirect” means to push back Iran, the report said, including “interdicting weapons shipments.” This report also mentioned the Iranian threat to Israel from Syria. The NDAA looks specifically at IRGC proxies in Syria, as the US believes that there are 3,000 IRGC members in Syria.

Israel has warned about Iranian-backed militias, and the role of groups like Hezbollah. The NDAA mentions Hezbollah specifically on numerous occasions, as well as Iranian threats to US allies in the Gulf and the Iran’s role supporting the Houthi rebels in Yemen.

“At the time of the signing of this report the conferees are not aware of any information that would justify the use of military force against Iran,” the report read, skirting around a call to war.

Still, with the NDAA, Congress gave Trump the permission to finally confront Iran.

Faces a rising number of Covid-19 cases and an...