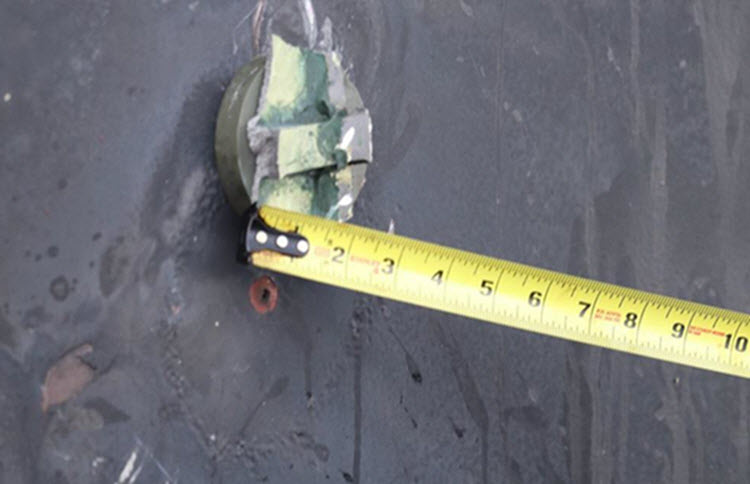 The US produced on Wednesday limpet mine fragments that it said came from one of the oil tankers attacked in the Gulf of Oman last week, claiming that the mine looks to be Iranian.

In Fujairah, the United Arab Emirates, the US Navy exhibited pieces of limpet mines and a magnet that American personnel took off one of the tankers – the Japanese Kokuka Courageous – that the US says were left behind by the Iranian Revolutionary Guards Corps (IRGC).

Sean Kido, commanding officer of an explosive ordnance dive and salvage task group in the US Naval Forces Central Command (NAVCENT), said: “The limpet mine that was used in the attack is distinguishable and also strikingly bearing a resemblance to Iranian mines that have already been publicly displayed in Iranian military parades.”

Kido said that NAVCENT had collected biometric information, including fingerprints from the ship’s hull, to help bring the attackers to justice. He also noted that he does not believe Iran intended to sink the ships.

U.S. special representative for Iran Brian Hook told US lawmakers that American intelligence confirms that Iranian vessels approached both oil tankers – the Kokuka Courageous and the Norwegian Front Altair – before the explosions that damaged their hulls on June 13. The US has also released images that it says are of the IRGC removing an unexploded mine from the Kokuka Courageous.

He said: “We assess this activity is consistent with an Iranian operation to attach limpet mines to the vessels… A senior IRGC official confirmed that personnel – IRGC personnel – had completed two actions.”

Iran denied being involved in these attacks or the May 12 attack on four tankers off the United Arab Emirates’ coast, even though they had already threatened to disrupt oil supplies in the nearby Strait of Hormuz after the US increased its sanctions on Iranian oil at the beginning of May.

Now, US-Iran tensions are at a 40-year high, especially after Iran vowed to violate the 2015 nuclear deal by increasing its uranium enrichment. Donald Trump has confirmed that he is prepared to take military action to stop Iran from developing a nuclear bomb, but it is not clear what action he will take to protect Gulf oil supplies.

Recently, Trump has sent an aircraft carrier and hundreds of additional troops to the Middle East.

By Pooya Stone On Friday, hundreds of thousands of...