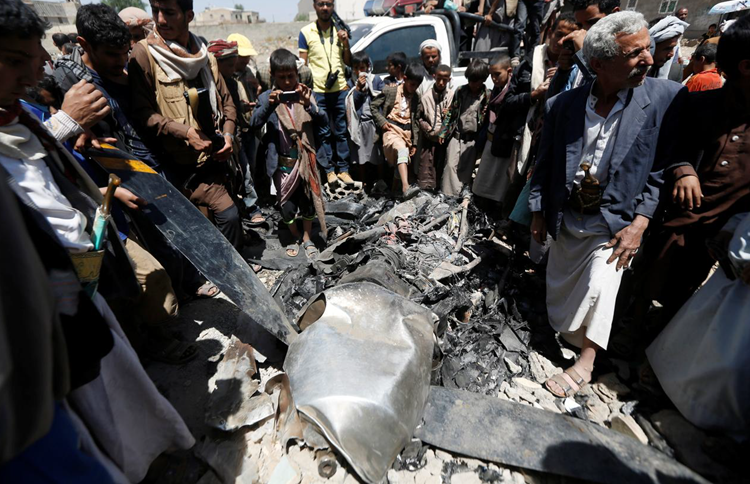 US officials say that a US military MQ-9 drone was shot down over Dhamar governate, in Yemen, which is just southeast of the Houthi-controlled capital Sanaa; the second incident of its kind this year.

One official, who spoke on the condition of anonymity, said the drone was shot down late on Tuesday by a surface-to-air missile operated by the Iran-backed Houthis, confirming the statement of Houthi military spokesman Yahya Saria, but did not give any specifics. The official said that, whilst losing the armed military drone made by California-based General Atomics, was expensive, it was not unprecedented and the US would not have a major response.

The US military said it was investigating “reports of an attack by Iranian-backed Houthi forces” on a US drone.

The U.S. military’s Central Command said: “We have been clear that Iran’s provocative actions and support to militants and proxies, like the Iranian-backed Houthis, poses a serious threat to stability in the region and our partners.”

The White House is aware of the reports and Donald Trump has been briefed on the matter.

National Security Council spokesman Garrett Marquis said: “We are aware of reports of an attack by Iranian-backed Houthi forces on a US drone. The President has been briefed and we continue to investigate the matter. This attack is only possible because of Iran’s lethal aid to the Houthis and serves as yet another example of the regime’s relentless efforts to escalate conflict and threaten regional stability.”

This shoot-down comes at a time of increased tensions between Iran and the US, following the Trump administration’s decision to pull out of the Iran Nuclear Deal in May 2018 and reimpose sanctions against Iran. The latest sanctions have targeted the Supreme Leader Ali Khamenei, Foreign Minister Javad Zarif, and several high-ranking commanders in the Iranian Revolutionary Guards Corps (IRGC), which was also designated as a terrorist organisation by the US.

This previously happened in June, when Iran shot down a US government-operated Hawk drone, which is much bigger than the MQ-9 drone. The US almost took retaliatory strikes, but Trump called it off when planes were in the air because it could have killed 150 people, which would have been an unnecessary escalation.

The US have occasionally launched drone and airstrikes against Yemen’s al Qaeda branch (AQAP), which are using the four-year conflict between the Houthis and President Abd-Rabbu Mansour Hadi’s internationally-recognised government to strengthen its hold in the country.

Iran elections: Turnout in Tehran much lower than last week