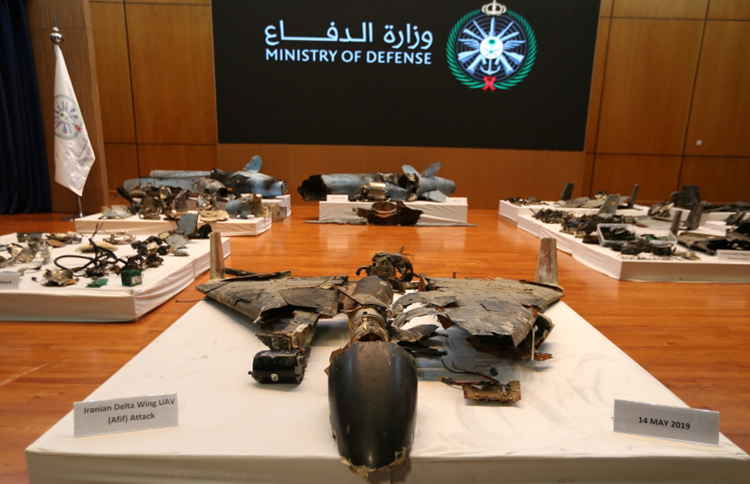 Saudi Arabia displayed remnants Wednesday of what it says are Iranian drones and cruise missiles used in the attack on Saudi oil facilities this weekend and “undeniable” evidence of Iranian aggression.

Defence Ministry representative Colonel Turki al-Malki said that 25 drones and missiles, including Iranian Delta Wing unmanned aerial vehicles (UAV) and “Ya Ali” cruise missiles, were launched at two oil plants in the September 14 attack. He further explained that the 18 drones and three missiles at the world’s largest oil processing facility in Abqaiq, but the missiles “fell short”.

He said: “The attack was launched from the north and unquestionably sponsored by Iran. The evidence … that you have seen in front of you, makes this undeniable.”

Iran has denied the allegation, which initially halved Saudi Arabia’s oil production and cut off 5% of the world’s total supply.

Authorities are still trying to work out the exact launch point, but it’s clear that it did not come from Yemen, where the Iran-backed Houthis, who claimed responsibility, are based.

The group on Wednesday gave details of the type of drones it said were used and warned that the United Arab Emirates that they might be next.

Houthi military spokesman Yahya Saria said: “Today and for the first time we announce that we have dozens of targets within our range in the UAE, some are in Abu Dhabi and can be attacked at any time.”

Malki responded that the attack couldn’t have come from Yemen in the South, as the Saudi missile defense systems would have stopped them, and that the Houthis were “covering up” for their patron Iran.

He said: “The precision impact of the cruise missile indicates advanced capability beyond Iran proxy capacity. The targeting direction of the site indicates north to south direction of travel.”

He said that the said four Ya Ali missiles that targeted Khurais have a range of 700 km and have been used by Iran’s Revolutionary Guards.

This attack shows the dangers of taking a soft policy towards Iran.

Maryam Rajavi, the President-elect of the National Council of Resistance of Iran (NCRI), said: “The clerical regime’s simultaneous missile and drone attacks from inside Iran on oil installations in Saudi Arabia is an act of war. The mullahs only understand the language of strength and firmness. Inaction vis-à-vis their religious fascist regime only emboldens them. The people of Iran are the first victims of this regime. The decisive solution to rid the Middle East of all its crises caused by the religious fascism in Iran is the change of the illegitimate regime by the Iranian people and their organized resistance.”

Merkel warns Iran not to end cooperation with IAEA