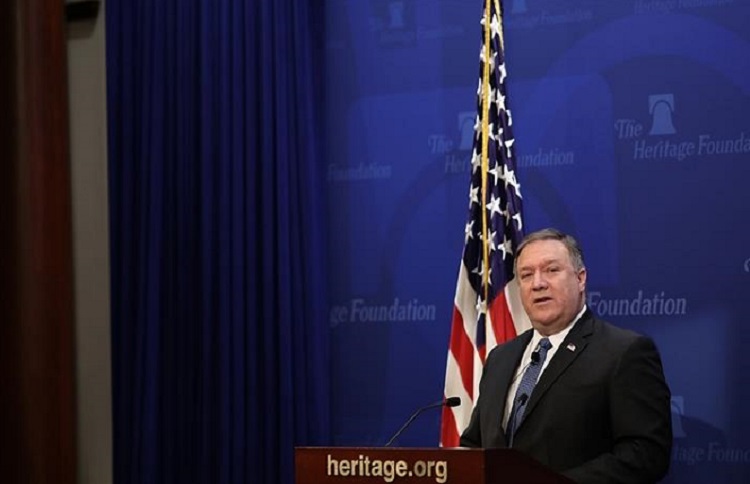 US Secretary of State Michael Pompeo on Tuesday spoke out against the international threats posed by Iran. Pompeo delivered a speech on “Trump Administration Diplomacy: The Untold Story” at the Heritage Foundation in Washington, D.C., on October 22, 2019.

The Trump administration had cited the deficiencies of the 2015 nuclear deal in its May 8, 2018 decision to withdraw the United States from the accord formally known as the Joint Comprehensive Plan of Action and reimpose all U.S secondary sanctions.

The stated intent of that step, as well as subsequent imposition of additional sanctions on Iran, is to apply “maximum pressure” on Iran to compel it to change its behavior, including negotiating a new JCPOA that takes into account the broad range of U.S. concerns.

But the answer of the Iranian government was undertaking actions against commercial shipping in the Persian Gulf and by exceeding some nuclear limits set by the JCPOA. And while US President Donald Trump has indicated a willingness to meet with the Iranian leaders without preconditions, Iranian leaders have said there will be no direct high-level US-Iran meetings until the United States reenters the 2015 JCPOA and lifts US sanctions.

In response, the US government warned Iran that they must change their malign behaviors to be any consideration of normalized US-Iran relations.

Pompeo: We Must Contain Iran in mid Easthttps://t.co/ExRQDc8nvx#Iran #MiddleEast pic.twitter.com/6lEBIxUQ2m

According to this on 22 October 2019 US Secretary of State Mike Pompeo stated: “Look, we had just pulled out of the Iran nuclear deal. I’d laid out 12 conditions, including that Iran ends its ballistic missile program, release U.S. hostages, stop financing terrorism – radical stuff, crazy. Stop taking hostages and shooting people in Europe.”

“We were standing up there for the Iranian people. Thank you for getting it right.”

“And as I said, that central idea, that animating principle that we laid out there about doing our best to help the Iranian people be successful.”

“And there’s no shortage of truth to be told. The truth is that Iran is the aggressor, not the aggrieved.”

“And after the regime bombed Saudi oil facilities, Britain, France, Germany – the E3 – released a statement. They said that they believed it was clear – quote, ‘clear to us that Iran bears responsibility for this attack… [and that] the time has come for Iran to accept negotiation on a long-term framework for its nuclear program.’ That is a very different position than they were before American diplomacy began to put pressure on the Islamic Republic of Iran and its corrupt, kleptocratic regime. The world is learning, too, that Iran responds to strength, not supplication.”