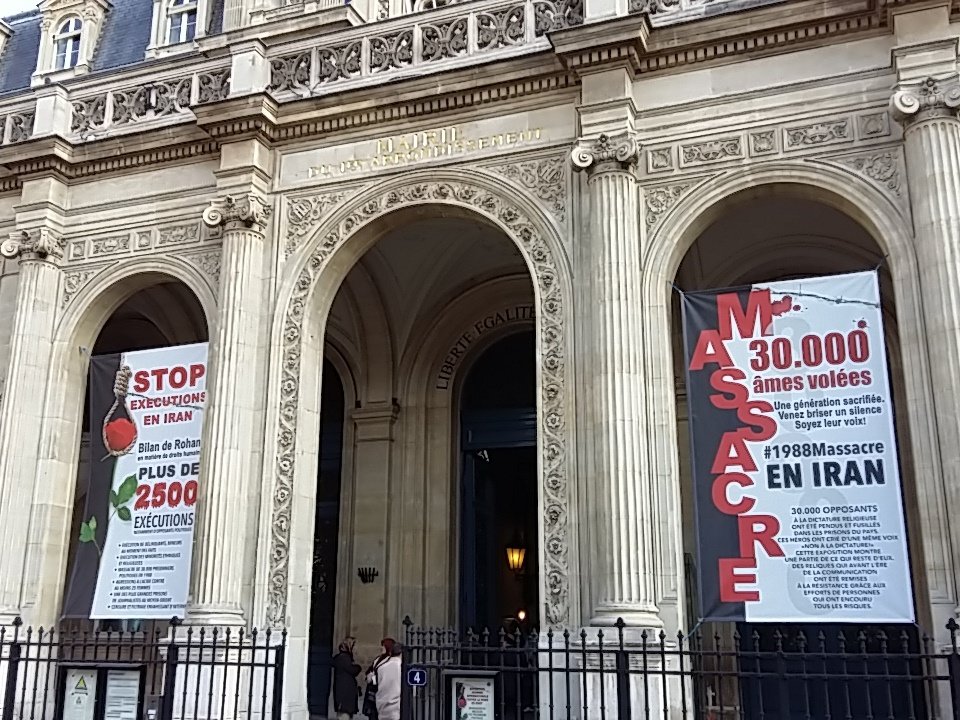 London, 13 October – The mayor’s office in Paris’ 1st district hosted an exposition into executions in Iran on October 10, The World Day Against the Death Penalty.

The exposition, organized by the Support Committee for Human Rights in Iran (SCHRI), featured speeches from politicians, human rights activists and witnesses of human rights violations from Iran.

It focused, most notably, on the 1988 Iranian Massacre but also the continued execution of political prisoners which has been denounced by the U.N. Secretary General.

Jean-François Legaret, the mayor of Paris’ 1st district, said that there is “a battle to fight against the death penalty and other barbaric acts in Iran”.

He stated that the West must not negotiate with Iran’s barbaric regime.

Henri Leclerc, Honorable President of the League for Human Rights, said that the West could not let Iran’s extensive use of the death penalty go unchallenged and warned that “unpunished crimes will recur.”

During 1988, the Iranian Regime murdered 30,000 political prisoners; mainly members of the People’s Mojahidin Organization of Iran (PMOI). Further evidence of the Iranian Regime’s role in the massacre was revealed in August after an audio recording of Ayatollah Hossein Ali Montazeri admonishing a Death Committee was leaked online.

Speaking of the 1988 Massacre, Leclerc said: “It is a crime against humanity when we know that thousands were executed while they were in prison. This must be denounced and we must act. We have sufficient materials. I hope that the U.N. conducts an investigation which brings those responsible to trial.”

Leclerc said that the victims “died for liberty around the world; these men, women, and children have a right to justice. If we leave such crimes unpunished, it is our future that will truly be tragic.”

The speakers emphasized the importance of bringing those responsible for the 1988 Massacre before an international court to account for their “crimes against humanity”.

Jacques Boutault, the mayor of Paris’ 2nd district thanked the Iranian Resistance and those who fought to bring human rights to Iran. He highlighted that the Iranian regime is complicit in Syrian Civil War and called on the French government to denounce Iran’s crimes in Syria.

Iran holds the highest number of executions per capita in the world and executed 1,000 people in 2015 alone.

Iran to get missile system from Russia: report

Reuters: Russia has agreed to sell an S-300 anti-aircraft...