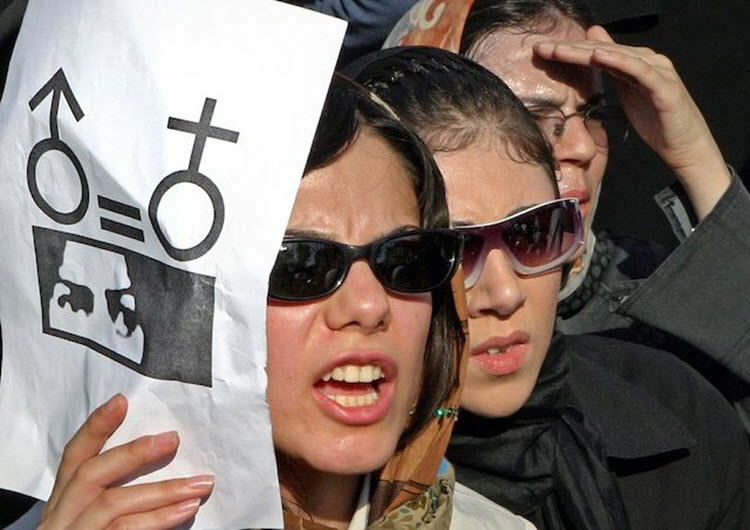 London, 20 Dec – Every year, the World Economic Forum releases a Global Gender Gap report which assesses how 144 countries are doing in terms of women’s rights, parity and equality.

In their latest report, Iran was listed as one of the worst five countries in the world for gender equality; ahead of only Chad, Syria, Pakistan and Yemen.

The worst part is that, while other countries in the Middle East have made some steps towards gender equality in the past year, Iran has actually taken some steps back in terms of women’s educational attainment and health.

Dr. Majid Rafizadeh, an Iran expert and political scientist, wrote an op-ed for Arab News in which he questioned how this could have happened under so-called moderate Hassan Rouhani who had promised to improve the economic situation for women- including creating jobs- and enhance their rights.

Dr. Majid Rafizadeh wrote: “After his election, not only did Rouhani not fulfil his promises, but he gave a freer rein to the Islamic Revolutionary Guard Corps, the Ministry of Intelligence, the militia group Basij, and the judiciary to crack down on women.”

This is not a new strategy though, the Iranian Regime has used this ploy since they took power in 1979. They promise to improve conditions for women in order to gain their support and then backtrack as soon as they are in power.

Dr. Majid Rafizadeh wrote: “After they assume power, women’s rights not only take a back seat on their agenda, but actually further deteriorate.”

Women and the economy

The worst area for women in Iran is economic participation. In this, Iran only comes ahead of Syria- a country embroiled in a seven-year civil war and plagued by the threat of ISIS. Statistically, the gender gap in Iran’s economy is three times worse than the average country. This is even worse for women from marginalised ethnic and religious groups, like Sunnis, Christians, Arabs and Kurds.

Official figures indicate that 42% of Iranian women aged 15-29 are unemployed but it is likely that the true number is much higher.

Dr. Majid Rafizadeh also addressed that these findings indicate that the 2015 nuclear deal has not benefitted the vast majority of the Iranian people if women are still so limited in economic participation and blame the Regime for it.

Dr. Majid Rafizadeh wrote: “President Rouhani promised the nuclear agreement would improve the economic standards of the population because of the relief of sanctions. But the WEF’s report clearly shows that half of the country’s population, Iranian women, have not benefited at all. This is due to the fact that the regime has not taken any concrete initiatives or legislative moves to ensure that women would benefit from the extra billions of dollars that the regime is receiving. The IRGC and the office of the Supreme Leader, Ali Khamenei, have been the major beneficiaries. Rouhani has further intensified the unequal economic reality…And Iran has the highest brain drain in the world, with many skilled and talented women leaving Iran for better economic opportunities.”

Other inequalities for women

Dr. Majid Rafizadeh wrote: “In conclusion, although the Iranian regime’s revenues have substantially increased, the situation of women under the presidency of the ‘moderate’ Rouhani has significantly deteriorated. Rouhani has failed to fulfil his promises. This also ought to be a warning sign for those who call for more business with the Iranian regime and advocate for more appeasement policies toward the ruling mullahs.”

AFP: Canada on Monday said new allegations about the...