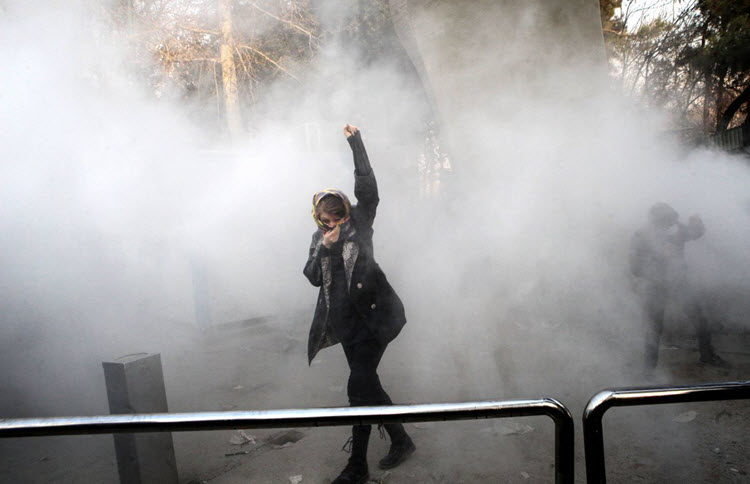 London, 9 August – In the wave of protests sweeping Iran, especially over the past week, Iranian women are having an effective impact. In fact, their influence has been so great that the Revolutionary Guard Corps has been compelled to speak out.

The state-run Fars news agency, allegedly affiliated with the Islamic Revolutionary Guard Corps (IRGC) — which has been designated as a terrorist entity by the United States Department of Treasury — wired two stories on August 5th, 2018, that highlighted the role of Iranian women as the driving force behind the recent protests.

International Youth day falls on August 12th, and since so many young women have taken a role in the Iranian people’s fight for freedom, article by the National Council of Resistance of Iran (NCRI) Women’s Committee takes a look at their source of energy.

A report entitled, “Sexual protests” (in an effort to tarnish the purpose and goal of the protests) Fars wrote, “Two women had undertaken the role of leaders of the protests at Vali-e Asr intersection [in downtown Tehran]. The team of two were standing on the sidewalk of Vali-e Asr Avenue and shouting at people, ‘People, why are you silent?’ Gradually 10 to 15 people gathered around them and they started chanting, ‘death to the dictator’.”

The NCRI Women’s Committee asks us to imagine the young women standing in street, in the capital ruled by a misogynous leadership, calling for people to join them in protest. “Knowing what the mullahs’ security forces do to the women they arrest and detain for speaking out against the regime, the mere thought of what these brave women were doing gives you goose bumps,” the Committee writes.

Video clips posted from Tehran and other cities clearly show that sometimes there is a team of women or even a single audacious woman leading the chants.

Last night #Tehran.
Women actively participated in 4th day of #Iranprotests as you see in video via MEK activists in #Iran, they chant: “Let him go!” as security forces are arresting protesters.
Also chant: “Deah to Bassiji” (para-military Bassij is involved in deadly crackdown) pic.twitter.com/5EHWEhxoZY

Also, according to the Fars report, “Some distance away, in the riots of Karaj, 20 leaders were identified and arrested, the majority of whom were women. A few days earlier, a video clip was being circulated in the social media showing a girl standing on a height and lecturing people in a bid to incite them [to protest.]”

Together hand-in-hand, let’s rebuild our country. Don’t be afraid. If we stand together, no force can intimidate us #Iranians! Why has our oil, electricity, resources, water all run-out? Why R we silent? We have been whispering for 40yrs, Enough is enough! #IranRegimeChange pic.twitter.com/UNqgPODT1j

Scores of people, youths and women, are shown walking down a street in one of the video clips from Karaj. The clip begins with the crowd chanting, “Free all political prisoners.” Following this, women are seen walking right in the center of the street chanting, “Do not fear, do not fear, we are all together.” In this way, these women encouraged everyone to join their ranks.

In another report by Fars, entitled, “Contrary to the claims of opposition media, the streets of Tehran are calm,” they write, “It is noteworthy that today, too, similar to the previous days, the leader of these people [the protesters] was a woman.”

#Tehran Vali-Asr – August 3, 2018: #Women side by side Iranian men in #IranProtests chanting against the theocratic dictatorship: “Iranians shout. Chant for your rights”.
(Footage via MEK) #FreeIran2018 #IranRegimeChange pic.twitter.com/YfcZQqqZEQ

“Although Fars had intended in its article to smear the anti-state protests by labeling them as ‘sexual protests’ but in every line of its report, it painted an image of Iran’s brave women undertaking their historic role as a ‘force for change’ in the struggle for change and overthrowing the clerical dictatorship,” according to the NCRI Women’s Committee. The news agency sought to humiliate and objectify Iranian women.

Under a separate subtitle called, “the beginning of the story” Fars wrote, “The (Farsi) hashtag zanan_e_barandaz [meaning women who seek the overthrow of the clerical rule] is still hot (i.e. favorite). This hashtag was created simultaneous with the PMOI’s meeting in Paris named, ‘Women Force for Change,’ which Maryam Rajavi attended.”

A group of youths sent an urgent video from inside state security forces car upon their arrest. They spoke their names one by one. These fearless girls and boys who posted a clip on the internet on Sunday night, August 5th, just as they were being transferred to jail, are examples of this resilient generation.