Iran’s Youth Confront Rouhani at the UN in New York 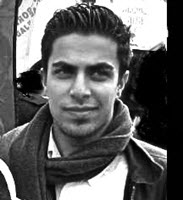 This past week I attended a large protest outside the United Nations General assembly in New York City. The event was notable for many reasons. It was by far the largest and most organized protest outside of the UN. It included thousands of Iranian-Americans voicing their opposition to the Iranian regime and to Hassan Rouhani. It also included a number of Arab-Americans from Syria and Yemen who were there to call for an end to Iranian intervention in their countries. But this is not what impressed me. What impressed me was the leadership of Iranian youth in this protest, I know this because I was there and worked alongside other young people to make this protest a success.

I arrived in New York in advance of the protest, and along with a colleague of mine, Ben Borhani, we began to organize preparations for the event. We posted our own personal stories and why we believe in democratic change in Iran on a Tumblr page. We joined other Iranians, young and old in picketing outside of Hassan Rouhani’s hotel. We put out a press release and conducted media outreach in order to ensure that the press covered the event. We even did an interview with a journalist focused on the role of Iranian youth in confronting Rouhani at the UN.

On the day of the rally we were not disappointed, and our hard work paid off. We got coverage from the Associated Press, and Reuters, Agence France Press, Voice of America and many more among more than three dozen media outlets who came to cover the rally. The young people, with the support of the older generation, were able to stage a successful protest and gain the attention of the world.

As someone who has traveled to the UN for more than a decade to voice my opposition to the Iranian regime, I can firmly say this year felt different. It felt different in a good way. I was reminded of the quote by Malcolm X, which says, “The future belongs to those who prepare for it today.” For those of us who grew up with the Iranian resistance, the future is now, and we have been preparing for it for all of our lives.

The Iran of tomorrow belongs to the young people, and it is our duty to learn everything we can from the generations of freedom fighters who came before us, and use these tools to ensure that the Iran of tomorrow is free, democratic, secular and independent. I left New York confident in the youth of Iran, and in the inevitability of this future.

Iran arrests ‘a number’ of Bahais

AFP: A number of Bahais who were "promoting their...

John Bolton: Iran Regime Must Not See Its 40th Birthday