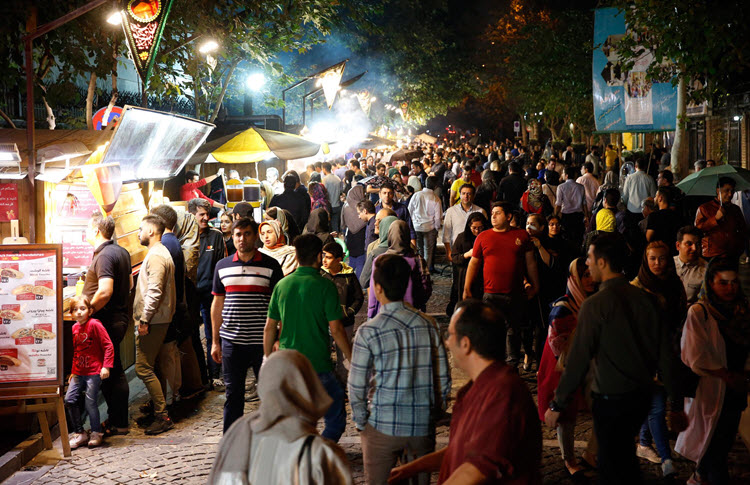 London, 10 Dec – The rising consumer goods prices in Iran, that have occurred in less than six months, are causing people, especially those of the middle class, to become impoverished. Iran Human Right Monitor reports that the country’s the state media is saying that the high price of goods has also led to increasing crime.

According to a report published in state-run Salamat News, “Some believe that the latest sanctions imposed by the United States are causes of increasing prices. It could be true in the case of foreign goods. But the uncontrolled increase in prices for Iranian goods and products, in a situation where the economic conditions of the people are not good at all, has challenged the consumers.” Prices have increased but the people have not received any raise in pay, the report revealed.

Tasnim News Agency, which is believed to be affiliated with the Islamic Revolutionary Guards Corps (IRGC), reports that the price of food has increased by almost 50%. Tasnim also cited Iran’s Statistical Center, who claimed that the inflation rate for food, beverages, and tobacco grew by 11.4% compared to the previous month and put the current inflation rate of food at 47.5%.

Nearly 80% of the Iranian people live under the poverty line, and the increased price of basic goods is a hardship that is resulting in protests and strikes. People in various sectors of society are demonstrating, including workers, truck drivers, shop owners, and teachers. Reports say that between October 26th and November 2nd, 127 protests and strikes occurred in several Iranian cities. In fact, the ongoing truck drivers’ strike has spread to more than 75 cities and 25 provinces so far.

Although Iranian President Rouhani promised that the government would give the impoverished population a food basket, with a second basket to follow before the Persian New Year, food baskets won’t solve the problem. The people of Iran are in crisis.

According to the Jahane San’at state-run Website, “The increase of the price of various types of basic commodities such as meat, rice, and protein products is ongoing.” They added, “A glance at the fruit and vegetable market also suggests that some sectors of the society can no longer afford fruit… Experts believe that given the trend of the rising price of goods on a weekly basis, the government support baskets cannot have much effect on the livelihoods of the people.”

State-run Jomhouri-e Eslami Daily warned that the Islamic Republic of Iran has no intention of supporting the poor. “The economic policy of the country – not only in this government but previous governments as well – is not based on the defense of the poor in general. A country that has an economic policy based on defending the impoverished does not have millions of families living under the line of poverty.”

As the country’s currency, the rial, continues to plummet, Iran’s workers have lost 80 percent of their purchasing power, claims Davoud Mirzaie, an economic expert close to the Iranian government. He recently said, “The 19.5 percent wage increase has not shown itself in the workers’ lives, meaning the value of their wages in March 2018 is far below its value in March 2016. In other words, the workers’ purchasing power has decreased between 50 to 80 percent.” In an interview with the state-run ISNA news agency on Wednesday, he said, “Such conditions have left the workers unable in providing for their basic needs. Therefore, labor unions have time and again called on the Ministry of Labor to see into this issue. Unfortunately, this remained unresolved.”

Meanwhile, President Rouhani assured parliament that there was no “hyperinflation” and that the country’s economic situation was under control. But, government officials and international reports say that inflation is at least 30% in Iran. The Supreme Labor Council calculations indicate that the workers’ families Market Basket suffers from a 48% inflation rate.

ILNA quoted an economist and university professor as saying on November 3rd, “Iran’s economy was turning into a disaster.” Morteza Afghah said, “We should consider the current situation as hyperinflation, and we should have a worse-than-expected forecast if economic variables and our foreign relations do not change; given the sharp fall of the number of people below the line of poverty, especially those belonging to the working class, this indicates the presence of hyperinflation.”

Afghah added, “In addition to workers, employees who had a better livelihood, like teachers and nurses, are also falling below the poverty line.”

The economist also remarked that the government had no idea of what to do about this economic disaster.

By Pooya Stone The spread of poverty among the...

Iran says US to be humiliated if it attacks

Reuters: Iran's defence minister said on Monday that any...