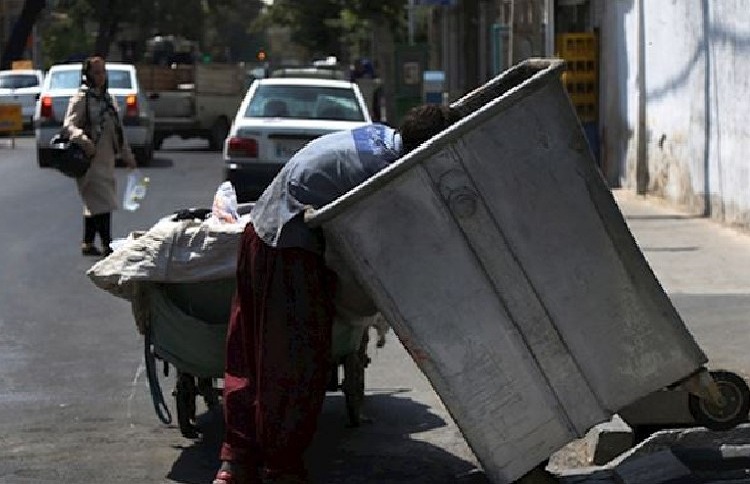 For more than 40 years the ayatollahs impounded Iran’s national wealth and spent it for either suppression inside the country or aggression abroad. They also deprived over 90 percent of the society of welfare and comfortable life. However, officials claimed that “We have no authority!”

“A dear worker asked me that ‘Why do I pursue the increasing salary for employees and retired from the government and military forces? And why don’t I have any amenability about workers and welfare-recipients?’

“God knows how much I felt ashamed, but the law has specified a mechanism that is out of my authority,” Head of Plan and Budget Organization Mohammad Bagher Nobakht tweeted on April 2.

Uncertainty Over the Government’s Supporting Coverage for Daily Workers

Furthermore, being ashamed and lack of authorities are not all the story. In such circumstances, the Labor Ministry has no idea how it must deal with millions of unemployed people or those who have been handicapped and have no resources to cover their expenditures. However, this Ministry is supposed to provide services and commodities for “unregistered” people.

“While the Labor Ministry hasn’t detected included people in the support, the Parliament’s (Majlis) Special Commission for Production Support approved the supportive package for daily workers. According to Nobakht, the Ministry of Cooperatives, Labor and Social Welfare is responsible for detecting these people. Given the government’s intention for covering this loan’s installments with livelihood assistance, it seems that supportive packages will belong to citizens who didn’t receive previous packages [for gasoline] like workers, public and private taxi drivers, and street-sellers,” Mashreq newspaper wrote on April 2.

Rouhani: Four Million Tons of Commodity Will Enter the Country

On the same say, President Hassan Rouhani claimed that “Today, around four million tons of essential commodities are in customs.” Therefore, a huge amount of people’s essential items remains in customs, in addition to the Plan and Budget Organization’s lack of agenda for covering labor and toiler classes of the society. The Labor Ministry hasn’t included people to deliver them the supportive packages. However, the public enjoys the President’s promises in a corrupt system that influential parts can make hundreds of pallets of cash disappear to their benefit in a glimpse.

“We should endeavor to cover people’s needs. They should be able to continue their business and economic activities along with observance of the health measures. Both topics are important to us. Fighting poverty is likely fighting coronavirus. We should consider both of them,” Tasnim news agency quoted Rouhani as saying on April 2.

Additionally, based on the cabinet’s enactment, there is an order for the allocation of credit cards to impoverished people. Credit cards are estimated to provide one or two million tomans [$238 to $476] for vulnerable segments of the society who have no fixed income.

In this context, the Ministry of Cooperatives, Labor, and Social Welfare should detect up to four million families who gain their expenditures through unstable jobs like taxi drivers, seasonal workers, street-seller, etc.

Also, a member of the Majlis Hossein-Ali Haji-Deligani suggested that “In such a dire circumstance, Iran’s noble nation, donate their religious charities to the families who lost their income due to the coronavirus outbreak,” Fars news agency published on March 29.

“According to our estimation, the coronavirus affected 15 percent of the workforce and the Gross Domestic Product (GDP) of the country. However, the 15-percent damage to the GDP is related to the period. We passed a 100-trillion-toman supportive package, which is around three percent of the country’s GDP, to support the national economy,” Vice President for Economic Affairs Mohammad Nahavandian said on March 31.

“25 trillion tomans from this figure are from national resources and the remaining 75 trillion tomans are from banking resources. We will withdraw a 1 billion euro grant to cover 25 trillion tomans. Simultaneously, we make efforts through official correspondence with the International Monetary Fund (IMF) for receiving facilities or releasing our exchange reserves in other countries,” Tasnim quoted Nahavandian as saying on the same day.

In this respect, undetected needy people are supposed to receive supplies that remained in customs besides 1 billion euros from the Development Fund at indeed their expense. Remaining 75 trillion tomans also should be provided by banking resources that is synonymous with printing banknotes without backing.

Additionally, Nahavandian claimed that “All of the mentioned supportive packages will provide with domestic resources.” This surprising statement raised questions about how the government that recently pleaded with the Organization of the Petroleum Exporting Countries (OPEC) for $500,000, and even has yet to receive the IMF’s assistance can distribute this amount among needy citizens? And why did the state avoid covering 90 percent of the society so far, given the vast poverty, unemployment, and organ selling in the country?

Dismiss Workers Under the Excuse of Coronavirus

Notably, such statements are raised while many workers are fired day after day and are adding to the multi-million unemployed population of the country. These workers have been sacrificed for the economic interests of government-linked managers.

“Factories’ profit should primarily be delivered to workers. Now, employers discharge laborers under different excuses. The government should pay attention to this issue on how a worker can cover his family’s needs while he should stay at home?” Tasnim quoted Hadi Abavi, Secretary-General for the Supreme Council of Workers’ Unions, as saying on April 3.

A government-linked economic expert Mahmoud Jamsaz revealed the fate of the path that the ayatollahs are rapidly driving the country onto. “According to the Statistics Center’s information, the country’s growth rate was -7.6 percent during the past nine months. The center also predicted that the GDP growth rate will be near zero in the next year. Investment also experienced an extreme drop. Between seven to ten percent of society possess the majority of the national capital. These people enjoy their relationship with the government and exploit rents that don’t move toward production.

“Such circumstances along with negative economic growth and low-income increase pressures on mid-classes and toiler strata of the society. The government has announced that 60 million people need livelihood subsidies, which show that the mid-class segment of the society is approaching to the poor, needy segments. Therefore, a huge part of the people has dropped under the poverty line.

“This rift in the society has created a severe ‘protesting potential’ among the rest of people against governing system,” IRNA plus quoted Jamsaz as saying on April 2.

Iranian ships step up precautions in Gulf of Aden