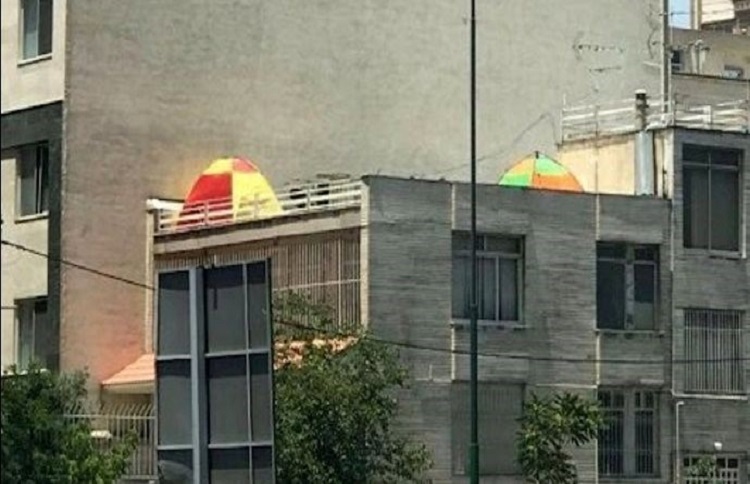 Iran with a total area of 1,648,195 km2 and the population density of 51 people per km2 is a country with enough space for city constructions and buildings.

But because of the regime’s wrong policies in urban engineering, water and energy distribution, industry and factories, and the balance in occupations, it has become one of the worst countries in housing conditions.

On social media and the media speaking about Iran in the past week one of the main subjects was the housing of people on the roofs of apartments mainly in Iran’s capital Tehran as well as in other metropoles. This is happening because of the increase in the apartment and housing rent prices in the last month. The government has offered no solution to solve this crisis.

The main cause of this increase in not recognizable from reports by state media and officials sources, because like most other things in this regime, statistics are not focused in the right way, and finding them out is very difficult, while the regime manipulates them. Only when a new social phenomenon suddenly appeared, then it is obvious that something very bad has happened.

But generally responsible for the bad housing conditions in Iran are the regime’s wrong economic policies and while housing has entered the stock market as Iran’s media said.

The official news agency IRNA on 27 June reported: “According to the statistics given by the Statistical Center of Iran, 24 percent of Iran’s urban households and 4.5 percent of the rural households are tenants. A survey of data from the Statistics Center on the average annual household expenditure in 2019 found that among non-food expenditures, the highest share of an urban household, with 48% was the share of housing, fuel and lighting costs, and the highest share of non-food expenditures for a rural household was the share of 30% of housing, fuel, and lighting.”

This is a significant sign that Iran is facing a big problem in housings. The average cost of one square meter of housing in Tehran in May 2020 reached more than 19 million Tomans, with an increase of 2 million Tomans from the previous month. One Iranian parliamentarian said that “the increase of housing prices has reached even the villages.”

The problem is that more than half of Iran’s households have an income less than their costs, and they are no longer able to pay the rent.

Another news around the subject of housing are the governments green light, “for the construction of 25 and 40 m2 apartments, which was discussed in the last month of the past year by Tehran’s municipality and the interior minister and they agreed, and it is near that the MP’s approved it. It was in late December last year that the deputy mayor of Tehran’s architecture and urban planning department announced a plan to build 25- to 40-meter houses, saying that the construction of such units was not a choice but a necessity.” (ISNA, 27 June)

The state-run media Javan in a reaction to this act called the government’s plan of the construction of 25 m2 housing, ‘absurd.’ It added, “The government which called the Mehr’s 75-meter residential housing units as ‘absurd’, in its last month, it has been thinking about the building of 25-meter units for the people.”

In a conference, the regime’s minister of transportation and metropolitan development rejected the claims about the construction of the 25-meter houses.

Now let us move back to the renting of roofs, after speaking about the housing conditions. IRNA wrote: “While a new psychological atmosphere has been created in cyberspace with the publication of roof and warehouse rental ads against the rental market, the Deputy Minister of Housing and Construction of the Ministry of Roads and Urban Development says: ‘The Ministry of Roads does not approve the rent, and it is not possible to rent this part of the building at all.’”

Issa Farhadi, the regime’s governor in Tehran, wrote: ‘So far, there has been no report in Tehran about renting of the roofs in Tehran.’

As much as everything in this regime is messed up, so we were not able to collect the right information about the housing situation. But the poor situation of Iran’s people is evidence enough and is showing us the truth. And like many other things the last conclusion is that the regime is lying, and many people are homeless, living in slums, pits, and under the bridges and now on rooftops.

Iran: a Short History of the Mek

The People’s Mojahedin Organization of Iran or Mojahedin-e Khalq...