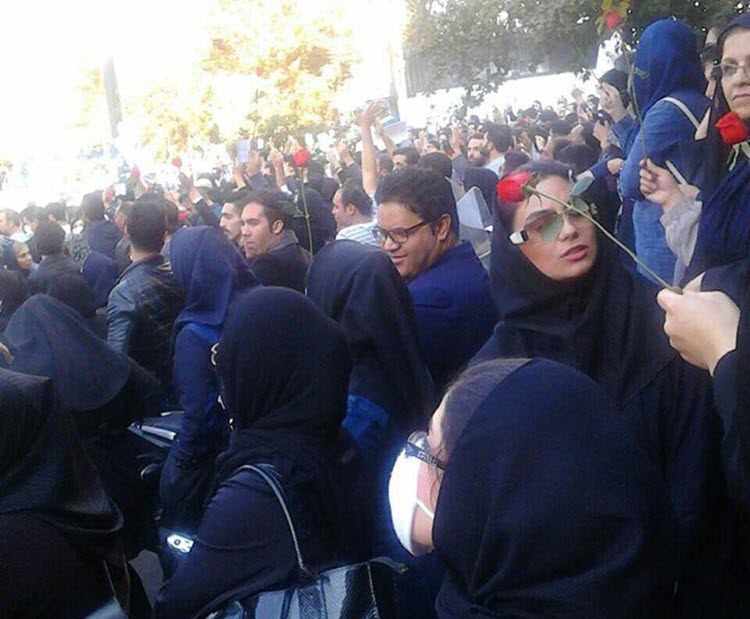 London, 27 October – The Iranian Regime has finally named some of the people they arrested earlier this week for protesting the imprisonment of a political prisoner.

They have released the names of three women; Baharak Azarnia, Zahra Shafii, and Nahid Babazazeh.

Eyewitness claim that the peaceful protest grew as large as 3,000 people, who held flowers and remained silent.

They had planned to leave at the end of visiting hours but the Iranian Regime’s Security Forces launched a sneak attack.

They used violence to disperse the crowd; even arresting some of those they were beating.

As a result, some demonstrators were in dire need of medical attention.

All those arrested on October 24, were interrogated at the notorious Evin Prison before being transferred to Fashafouyeh and Qarchak prisons, the next day.

On October 21, the Security Forces launched their first attack on the peaceful protesters attempting to disperse them with violence and the use of tear gas which made many people in the crowd, including children, very sick.

Taheri is in the hospital because he fell into a coma whilst on hunger strike.

He had been sentenced to five years’ imprisonment, a fine of 900 million Tomans and 74 lashes for ‘blasphemy’ and ‘illegal intervention in medical affairs and treatment of patients’.

His sentence has finished and he had paid the fine but the Regime refuses to release him, instead they are trying to file new charges against him.
There were protests demanding his release in Shiraz, Mashhad, and Urmia, as well as Tehran.

Amnesty International has called on the Iranian Regime to provide an update on Taheri’s medical status and to release the political prisoner immediately.

Iran brushes off US rocket rebuke

AFP: Iran on Tuesday brushed aside concerns from its...