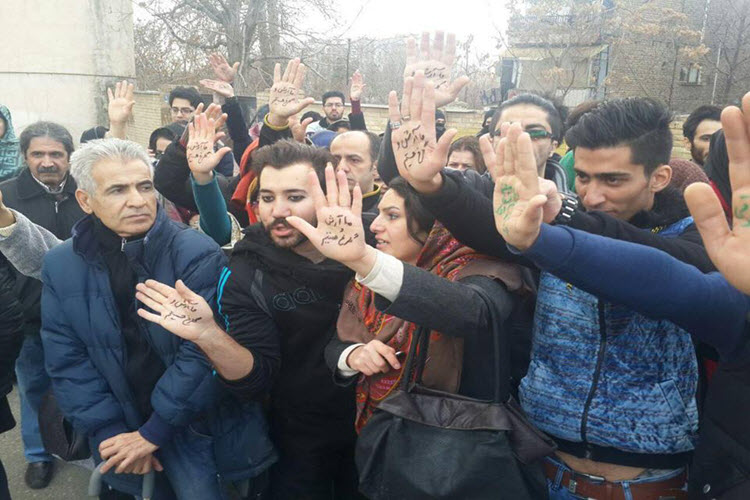 London, 3 Jan – Hundreds of people gathered in front of the notorious Evin Prison in Iran on January 2, to show support for Arash Sadeghi, a political prisoner on hunger strike.

The demonstrators have called for the immediate release of Arash and his wife Golrokh Ebrahimi Iraie, and all other political prisoners.

Security forces attempted to break up the demonstration but the number of protesters has only increased.

Arash has been hunger strike for 70 days since the imprisonment of his wife for making a private statement against execution by stoning in Iran in an unpublished short story. She was sentenced to six years in prison for insulting the Iranian mullahs.

He is protesting the unlawful arrest of both himself and his wife, demanding that their basic human rights to freedom of speech be respected.

Just a few days ago, Arash’s father staged a hunger strike in support of his son. Hossein Sadeghi announced that his son’s condition had worsened considerably and he may even be on the brink of death.

He said: “[Beginning on] Friday, December 23, I staged a hunger strike to protest the authorities’ lack of attention to the demands of my child, and to protest keeping him incommunicado and denying him visit with his wife, and also to support his hunger strike and legitimate demands. I demand his dire condition be addressed and his demands be met. I call on all to be the voice of my son, his wife and other imprisoned loved ones (political prisoners).”

Arash has been vomiting blood, having seizures and his internal organs have been increasingly damaged according to the National Council of Resistance of Iran. A hospital report states that he is in severe danger of cardiac arrest.

Still, the Iranian Regime refuses to back down, with the head of Evin Prison said he would not let Arash leave the prison alive.
Arash was arrested for spreading propaganda against the regime and violating national security. These are common charges levied against political prisoners in Iran when all they have done is speak out against the Regime decisions.

The Iranian Resistance has called on human rights organisations and the international community to intervene and save Arash before it is too late.

Iran says Turkmenistan not to be trusted

Reuters: Iran may review energy ties with Turkmenistan after...