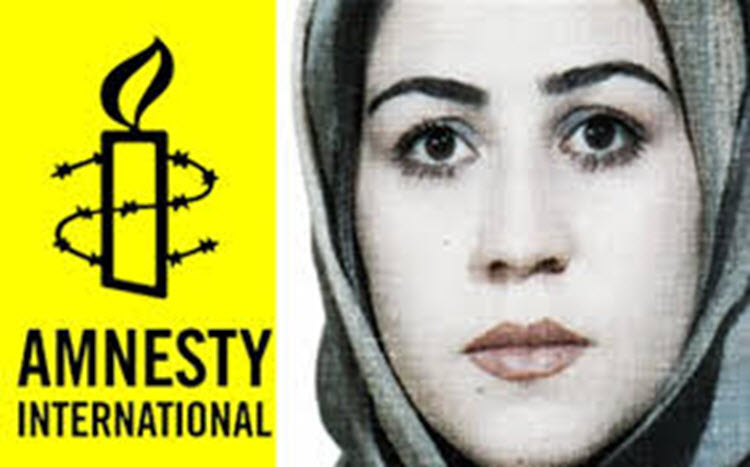 London, 23 May – Amnesty International has released an updated Urgent Notice about a political prisoner who is being threatened with an extended prison sentence for seeking justice for her family members who were illegally executed by the Regime in the 1988 massacre of political prisoners in Iran.

Maryam Akbari Monfared, who is currently in Tehran’s Evin prison, has written many open letters demanding that the Regime be brought to justice over the massacre which killed 30,000 political prisoners in a matter of months.

She has also filed a formal complaint with the Iranian Prosecutor’s Office and is seeking an investigation into the massacre, the locations of the mass graves and the identities of the perpetrators.

The Regime has responded by threatening to move her to a remote prison in Sistan Baluchestan province, south-eastern Iran, a common move by the Iranian mullahs when they wish to make someone disappear, and extending her sentence by three years.

Amnesty’s statement notes that Monfared’s husband, Hassan Jafari Hatam, was summoned to the Ministry of Intelligence office in Tehran on May 13 and interrogated. Hatam was verbally abused and threatened during this meeting and was told that unless his wife stopped calling for justice for murdered political prisoners, she would pay.

Amnesty wrote: “”To date, the authorities have not processed the complaint. Instead, they have resorted to various punitive tactics. They have refused to take Maryam Akbari Monfared to her medical appointments outside the prison to receive adequate treatment for her rheumatoid arthritis and thyroid problems. As a result, she is experiencing severe pain in her legs. They have also repeatedly threatened to stop her family visits. ”

Monfared is serving 15 years for “enmity against God”, purely because she is related to other members of the banned political group, the People’s Mojahedin Organization of Iran (PMOI), whom she called and visited once when they had been exiled to Iraq. There is no evidence that she was actively involved in political activism before her arrest.

She was arrested in 2009 and her family did not know where she was for five months. For the first 43 days, she was held in solitary confinement, subjected to intense interrogations and denied access to a lawyer.

Her appeal was rejected and her requests for a retrial have been ignored.

Why Is Iranian Regime Preventing International Inspectors From Visiting Their Military Sites?