Former Political Prisoner: We Will Not Give up on Justice for 1988 Iranian Massacre Victims 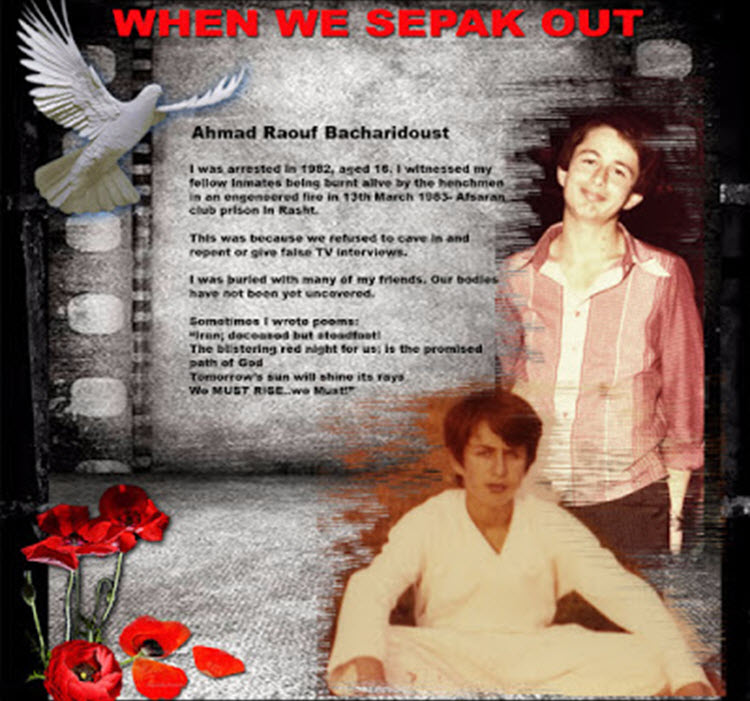 London, 1 Sep – A former Iranian political prisoner has written an op-ed for the International Business Times on the fight for justice for the victims of the 1988 massacre in which 30,000 people were murdered by the Iranian Regime.

Massoumeh Raouf, a member of the National Council of Resistance of Iran, advised that the international community join the fight for justice and demand that those responsible are tried for crimes against humanity.

Raouf, who currently lives in exile in Europe, lost her brother in the horrific massacre and revealed the heartbreaking tale of how she found out about his death.

Her younger brother, Ahmad, who was imprisoned for attending meetings of the opposition group the People’s Mojahedin Organization of Iran (PMOI/MEK) at the age of 16 wrote her a letter upon his release from prison.

He said that he was going to flee Iran and live with her in exile, where they would be safe.

She wrote: “Months passed and I waited to see Ahmad. But why wasn’t there any news of him? Why didn’t he call? My heart was full of anxiety. There was a nagging feeling inside telling me something had happened.”

Then the news broke, as fast as it could given the Regime’s censorship, that the Supreme Leader Ruhollah Khomeini had issued a fatwa for the execution of political prisoners.

She called her father and asked for news of Ahmad, only to be told that he had left to see her sometime before. It was obvious that Ahmad had been captured by the Regime before fleeing and executed.

She wrote: “I still remember the long silence during that phone call. If he was not with me, then…?! My father had assumed correctly. He started looking for Ahmad from one prison to another. But the more he searched, the less he found.

Neither a name, nor a sign, nor a grave.”

It wasn’t until 1991 that they knew that Ahmad was a victim of the mullahs, but he remains alive in their hearts.

She wrote: “This painful story remains alive for my family and all of Iranian society. Twenty-nine years later the authorities have never given my brother’s body to my family, and we don’t even know where he was buried. My father has been searching for his grave for 29 years.”

Raouf wrote that despite everything she still has hope that those responsible will be held to account for their actions, especially thanks to the Justice Movement campaign which advocates for the victims of the massacre and works to expose the Regime complicity and duplicity surrounding the massacre.

Their smoking gun is the audio recording of then-deputy to Khomeini Hossein Ali Montazeri addressing members of the Death Committee, which was released by Montazeri’s son, also called Ahmad, last year.

In the recording, Montazeri told the Death Committee members: “The gravest crime in the Islamic Republic, for which history will condemn us, was carried out by you. Your names will go down in history as criminals.”

He was sacked and put under house arrest for those comments, while the members of the Death Committee have never been punished and have actually been rewarded for their evil crimes.

Indeed, both “justice” ministers who have served under supposed moderate President Hassan Rouhani were members of the Death Committees: Alireza Avaie and Mostafa Pourmohammadi.

Raouf wrote: “As underscored by Mrs Maryam Rajavi, president of the National Council of Resistance of Iran, the West’s indifference has only emboldened the mullahs to continue their crackdown and killings. An international fact-finding mission into the 1988 massacre should have been established long ago. This is the minimum expectation of my father, who continues his effort to find his son’s grave.”

US deploys F-22s to base near Iran