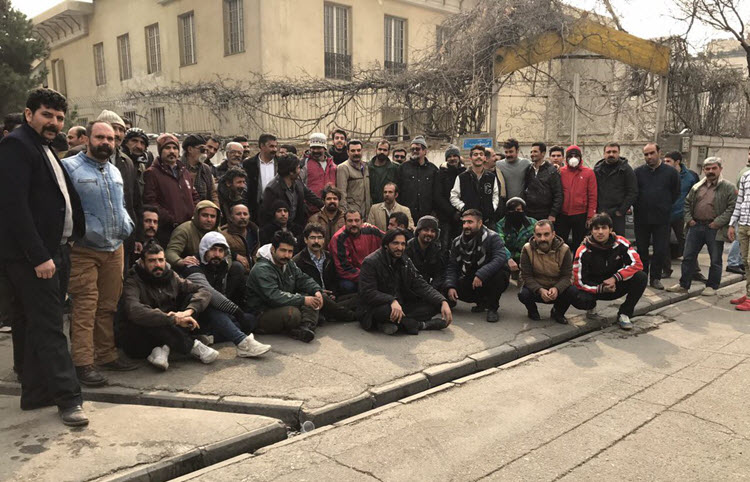 London, 25 Feb – While in recent days, Iranian judicial authorities have emphasized on dealing with the arrested people in the Pasdaran avenue demonstrations, some of the Friday prayer leaders in Iran called these people “terrorists” and “British affiliates”, comparing them with Daesh (ISIS) in Iraq and Syria.

Earlier, government and security officials have accused the People’s Mojahedin Organization of Iran, the US, Israel and Saudi Arabia of being involved in the mass protests in Iran in early January.

According to the state-run Fars News Agency on February 13, Mohammad Ali Movahedi Kermani, Tehran’s Friday prayer leader, referring to the clashes between the Dervishes and the police and Basij forces, called on the judiciary to stricktly and severly deal with what he called “the criminals who committed assassinations and acts of aggression against people’s property”.

Friday prayer leaders in Isfahan, Qom, Shiraz, Mashhad and a number of other cities have also spoken against the Gonabadi Dervishes.

Meanwhile, chief of the general staff of the Iranian Armed Forces, Hossein Bagheri, issued a message on Thursday calling the killing of three members of security forces and two Basijis in the clashes on Pasdaran Avenue as “brutal crime of the source of corruption and ISIS scum of Dervish façade.”

He stated: “Strong defenders of national security do not allow the plays like those in Pasdaran Avenue to be repeated and will resolutely deal with every threat to the security of citizens.”

Bagheri also called the dervishes involved in clashes with the security forces in the Pasdaran Avenue as “a dirty and mercenary community.”

Monday night and early Tuesday clashes occurred between Iranian regime security forces and Gonabadi Dervishes on Pasdaran Avenue in Tehran in which according to the regime officials the officers of security forces and two members of Basij forces were killed. A number of Dervishes were also reportedly killed during the clashes.

Head of Tehran’s police, Hassan Rahimi, in a TV interview on Wednesday, February 21 said: “We could hit the intended home (of dervishes) with RPG (rocket-propelled grenade), but we were acting and with tact and authority.”

Security officials announced that 300 dervishes were arrested and Majzoban Noor website announced that there is no news about the situation of hundreds of detained dervishes.

The gathering of Gonabadi dervishes in front of the police station 102 in Pasdaran Avenue (north of Tehran) started after one of their leaders named Nematollah Riyahi was arrested.

Government actions against dervishes have intensified since 2005. In this year, the widespread destruction of the praying places of Gonabadi dervishes in different cities of Iran started and a large number of dervishes were arrested.

Gonabadi dervishes have been facing persecution, imprisonment, deprivation of social rights, threats… for more than 15 years.

AP: Russia's foreign minister on Friday warned against the...

Clash is reported in Iran at protest