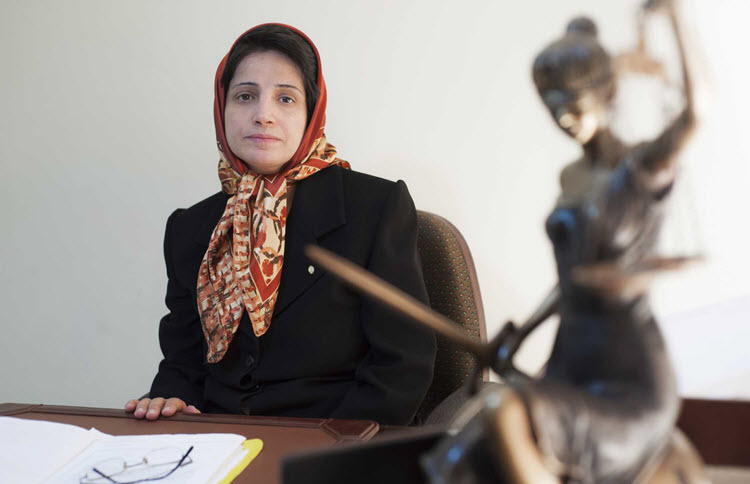 A leading Iranian human rights lawyer who has defended people for protesting the country’s forced veiling of women faces up to 34 years in prison and 148 lashes after being convicted on bogus national security charges.

The conviction of Nasrin Sotoudeh, who previously spent three years in prison for her work, shows how insecure the ruling system is to any peaceful challenge and how false the promises by so-called moderates to repeal the law were.

Sotoudeh, 55, refused to attend the closed-door trial before Tehran’s Revolutionary Court after being prevented from selecting her own counsel, so she was convicted in absentia.

The charges against her included membership in a human rights group and “encouraging corruption and prostitution”, among other things, which suggests that she was arrested for defending mandatory hijab protesters.

As Iranian media tried to hide this case, lest it makes them look bad on the international stage, most of the details have been gathered from Sotoudeh’s husband Reza Khandan, who faces a six-year prison sentence for providing Facebook updates on her case.

Khandan advised that Evin Prison authorities are increasing pressure on female inmates in an effort to stop them from leaking details on the case or the conditions they are kept in. He also said that Sotoudeh had not received the verdict or her sentence in writing.

Karin Deutsch Karlekar of PEN America said: “Sotoudeh’s path-breaking work defending women in Iran, as well as her consistent attempts to uphold the rule of law, should not be penalized with such a blatant miscarriage of justice.”

While Amnesty International urged Iranian Judiciary Head, Ebrahim Raisi, to release Sotoudeh, who is “a prisoner of conscience, jailed solely for her peaceful human rights work” and ensure she has access to a lawyer of her choosing and her family.

Amnesty wrote: “I urge you to stop criminalizing the work of women’s rights defenders, including those who peacefully protest against forced hijab, and abolish forced hijab laws.”

Amnesty is calling on people to write to the Iranian Judiciary demanding Sotoudeh’s immediate and unconditional release.

Sotoudeh, who received the prestigious Sakharov Prize for Freedom of Thought from the European Union in 2012, was arrested in June 2018, shortly after defending women protesting the forced hijab.

One of her clients at the time of her arrest had just been sentenced to 20 years in prison, even though Tehran’s police said in December 2017 that they would no longer arrest women for not observing the hijab.

UPI: The Bushehr nuclear facility in Iran is progressing...