Seven Iranians Sentenced to Amputations and Flogging for Theft 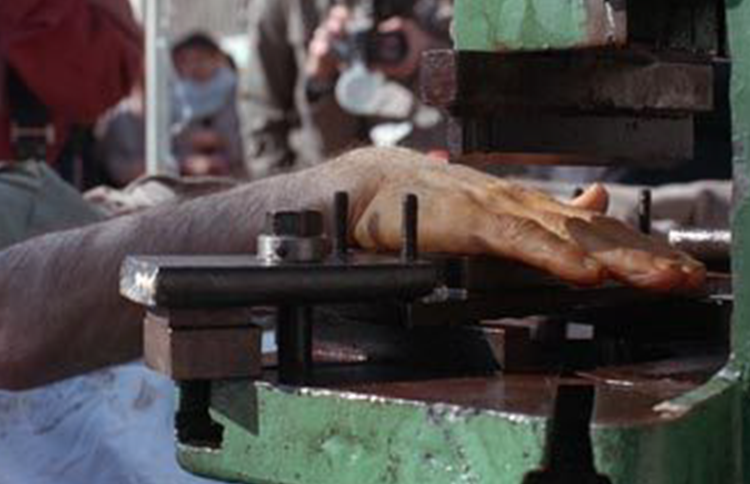 Seven Iranians charged with robbery have been sentenced to vicious corporal punishments, like hand amputation, finger amputation, and flogging.

The 8th Branch of the Tehran Criminal Court sentenced Ali, the head of the gang, to hand amputation, and Shahin, his accomplice, to the amputation of four fingers on his right hand, according to the state-run Khorasan daily.

The other five were sentenced to between three and five years in prison, as well as 74 lashes each.

The 39th Branch of the Supreme Court has confirmed Ali’s hand amputation sentence and the lashes for the five men.

Khorasan reported that the men robbed the homes of affluent Iranians in Tehran.

Iran continues to hand down harsh sentences for petty offences, with the Attorney-General even calling the “low numbers” of hand amputation punishments in Iran because of human rights condemnations “unfortunate”, despite the high-level and wide-ranging embezzlement and corruption of officials.

Attorney General Mohammad Jafar Montazeri said in January that the hands of thieves must be amputated but regretted that Iran had abandoned some of its “divine laws” in order to avoid condemnation by the United Nations.

He told police commanders: “One of the mistakes that we make is that we are afraid of human rights (propaganda) and that they say that you treat thieves violently.”

He also claimed that thefts had increased in Iran compared to last year, now accounting for 28% of all crimes in Iran and being the second-most-common crime in Iran.

Even during this rant, Montazeri was still forced to acknowledge that the reason behind increased theft was Iran’s dire economic conditions, including “unemployment” and the “closure of factories”.

There are 23 prisoners convicted of theft currently being held in the Greater Tehran Prison in Fashafoyeh, waiting for their hand amputation sentence to be carried out, most for theft of property worth less than $600.

According to the Abdorrahman Boroumand Foundation, a human rights group, the Iranian authorities issued at least 215 amputation sentences between 2007 and 2017, while carrying out 125 amputations, including at least six amputations in public.

Amnesty International said that Iranian authorities have always defended amputation as the best way to deter theft and expressed regret that it cannot be carried out in public on a widespread basis without attracting international condemnation.

AFP: Campaigning for Iraq's April 30 elections will be "highly...