Iran’s 1988 Massacre: The Untold Story of One of the Worst Crimes Against the Humanity After WW2 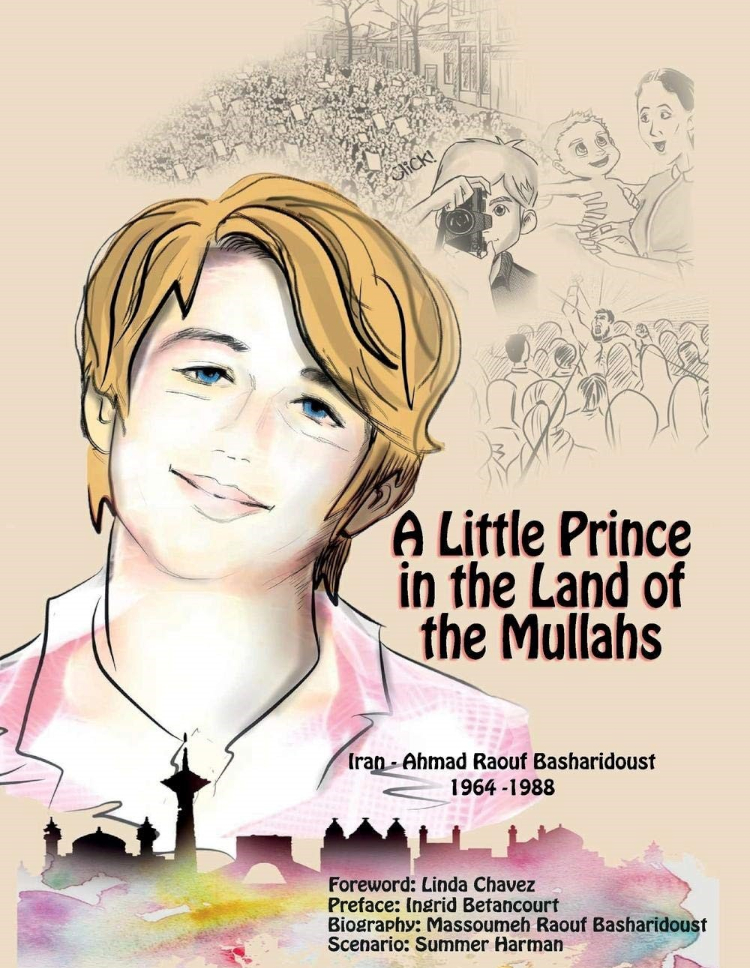 In the summer of 1988, Iranian authorities carried out a series of mass executions of political prisoners across Iran, in the span of several months. The majority of those killed were supporters of the opposition People’s Mujahedin of Iran (PMOI/MEK), although supporters of other leftist factions were executed as well.

The killings have been described as a political purge without precedent in modern Iranian history, both in terms of scope and coverup. However, the exact number of prisoners executed remains unknown, but some estimates put the number at over 30,000. Because of the large number, prisoners were loaded onto forklift trucks in groups of six and hanged from cranes in half-hour intervals.

“The Little Prince in the Land of the Mullahs”, a book by Iranian dissident Massoumeh Raouf Basharidoust, tells the true story of a teenager who stood up to Iran’s theocratic government…

The book is based on the words of the “little prince’s” surviving sister and told through drawn pictures. Ahmad, the hero of this story, was killed in 1988 at the age of 24, while in captivity. But the perpetrators of the murder remain in key positions of power in Iran.

It is a graphic novel where Ahmad Raouf-Basharidoust, born in 1964 to a middle-class family and raised in northern Iran, recounts his childhood in Shah’s Iran, the 1979 revolution and the arrival of Khomeini to power in Iran. He explains how this intelligent and curious teenager became an active supporter of the People’s Mojahedin of Iran, the democratic opposition to the mullahs. After more than five years of imprisonment, he was murdered in the summer of 1988, following a fatwa (religious order) by Khomeini, which led to the massacre of political prisoners in Iran.

In reading this story, not only do we discover Ahmad’s journey, but also the story of the generation of this revolution that has been crushed by the mullahs’ cruelty. A generation that said “no” to Khomeini and his executioners despite the terrible conditions of detention. A generation with a dream of freedom and democracy for Iran. This story takes us through the contemporary history of Iran, covering the 1964-1988 period. The little prince in the land of the mullahs is published in one volume.

Mahsomeh Raouf wrote about her book:

I would like to introduce you to my book which is coming out at the Editions of the Society of Writers. For more than a year, I worked with a friend artist and cartoonists on a comic book that tells the story of my brother Ahmad Raouf. This book is entitled “a little prince in the land of the mullahs”.
This is because my little brother, Ahmad, was an Iranian with blond hair like corn and blue eyes sparkling and curious. He was always looking for knowledge and kept asking questions. That’s why I called him the “little prince”.

The years have passed and my little prince has grown up and with the great upheaval of the revolution in Iran, he was quick to enter the resistance for freedom. When the Islamists usurped the leadership of the 1979 revolutionary movement, Ahmad and tens of thousands of young freedom-loving people were decimated in what will be described by Amnesty International as the “prison massacre”. 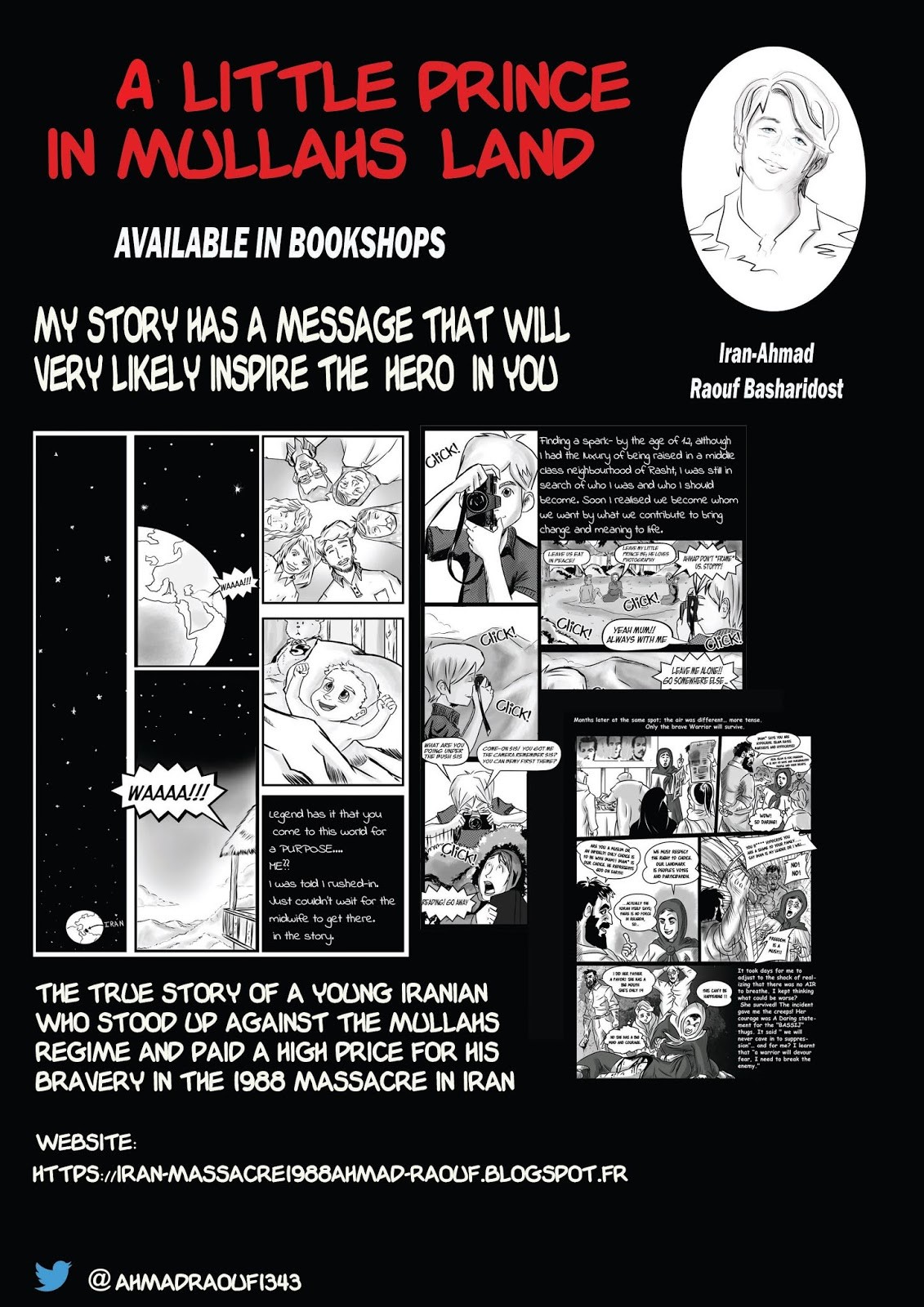 This crime against humanity has destroyed the life of my brother and those of 30,000 other red roses of the Iranian youth during the summer of 1988. Today, we still don’t know where he and all the others were buried, but their executioners are still in place.

For years, I wondered how to convey the message of these thousands of young people who sacrificed their lives for the freedom of future generations and especially those who are now the age my brother Ahmad was at the time of his execution.

So, I came to recount this story, “the darkest story in the history of human rights violations in Iran” – (in the words of a UN rapporteur) – through the clear and simple images and sentences of a graphic novel.
In my opinion, it is a step parallel to the legal and political work in progress, to reach the opinion in a wider way. It is a graphic novel that tells the story of Ahmad’s birth and childhood in Shah’s Iran, the February Revolution, and Khomeini’s rise to power in Iran. He explains how this intelligent and inquisitive teenager became an active sympathizer of the People’s Mojahedin Organization of Iran (PMOI/MEK), the democratic opposition to the mullahs, his arrest and torture and more than 5 years of imprisonment.

In reading this story, not only do we discover the path of my brother Ahmad, but also the story of the generation of this revolution that was crushed by the mullahs. A generation that said “no” to Khomeini and his executioners despite the terrible conditions of detention, a generation with a dream of freedom and democracy for Iran. This story takes us through the contemporary history of Iran, covering the period 64-88.
For decades, my brother’s message has been buried by the dark forces of forgetfulness. Through these pages, by reading them, you will revive it.

“A Little Prince in the Land of the Mullahs revives the little hero in the reader by telling the story of a brave young man who wants nothing more than to live the life that all boys and girls want: to be free, happy, and secure in his homeland. Like tens of thousands of others, the little prince suffers. He faces arrest, torture, and ultimately sacrifices his life.”

“The story of A Little Prince in the Land of the Mullahs reveals to us, without any pretenses, the human tragedy facing millions of Iranians. With Ahmad, we can go through this tragedy, live it and try to understand why, so that the truth can no longer be hidden, so that justice can be done, and so that the liberation so long-awaited by the Iranian people can happen.”